Reading Robert Caro's final volume of the biography of Lyndon Johnson this summer has been a nice diversion from the current heated rhetoric of the 2012 Presidential campaign.  It has also shown how much the political process has changed over the psst four decades.  As the Republican and Democrat conventions convene over the next two weeks it is hard to remember when conventions actually had some drama and uncertainty.   Today the ticket is complete long before the conventions start and they become nothing more than each party's opportunity to present their candidates in the best possible light.  As the Caro book explains, this was far from the situation in 1960.  Many states still remained uncommitted to a candidate with many states having "favorite sons" looking to use their votes to bargain with the different candidates.  Johnson wasn't selected as Kennedy's running mate until after Kennedy has wrapped up the nomination.  All of these realities have been changed with the increasing use of state primaries to allocate delegates to the conventions. 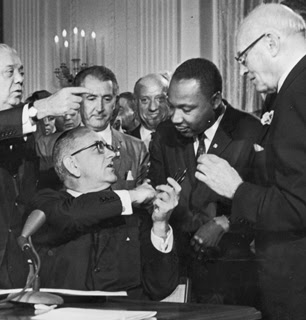 One of President Johnson's most famous quotes was his quote on the occasion of signing of the civil rights legislation in 1964.  He was quoted as saying that he had just delivered the South to the Republicans.  This reality slowly developed over the late 1960's and into the 1970's and 1980's.  Where the Republican Party once had liberals such as Jacob Javits, Charles Percy, Mark Hatfield and Edmond Brooke the party took to eliminating the liberal wing of the party.  The South has become an increasingly important anchor of the party.  The political leanings of the conservative South has made it politically dangerous for any national Republican to stray too far from its conservative doctrine.  Not believing in science and tolerance for an increasingly diverse population has put a "Southern stamp" on the national party.  Regardless of the outcome of this year's election, and moderate voices such as Jeb Bush , this trend seems to be taking stronger root in the Republican party as each year passes.  The 2012 Republican Platform seems even too controversial for Mitt Romney to embrace some of its planks.   This reality is shown by Reince Priebus, the National Republican Party Chairman, saying that "This is the platform of the Republican Party. It's not the platform of Mitt Romney." Huh? Is Romney running as an "independent?"
Posted by duanestclair at 6:12 AM