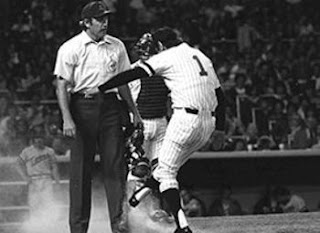 Watching a recent Orioles game where the umpires had some close calls that went against the Orioles I couldn't help but think what impact the tirades of the managers and players have on young people watching the game.  How is throwing a temper tantrum seen as a normal reaction to something with which you disagree?  Why are managers allowed to come on the field to argue a call?  Do they really think the umpire is going to change a call? Is this the proper way to "fire up" your player?
I have a little perspective on these matters by being a softball umpire for a number of years in Howard County.  First rule of umpiring is to get the call right as you see it and stick with the call.  Changing your call only makes you look indecisive.   Second rule of umpiring is don't make the call until you are sure of the call.  If you make a call too quick you may have to reverse it.  Best example of this is calling a force out quickly and then having the fielder drop the ball. It doesn't look good to call a "out" and then a "safe."
Back to the Orioles game.  On the tag play at home plate the umpire was out of position to make the call.  His view of the play was blocked by the catcher and he had to hop over the player sliding into home.  It is hard to quickly judge the best position to be in to make a call as the throw can cause cause fielders to adjust their position on block your view.  Moving to a new position can cause you to take your eye off the play.  On the home plate umpire overruling the first base umpire after a manage protest is a big "no-no."  The home plate umpire should only have ruled on the play if the first base umpire had requested assistance in making the call because his view had been obstructed and not because of a manager protesting the call.
Finally one thing I have learned in umpiring is that the losing team will almost always be the one to complain about your umpiring calls.  Losing causes people to look for scapegoats.

Posted by duanestclair at 9:54 AM