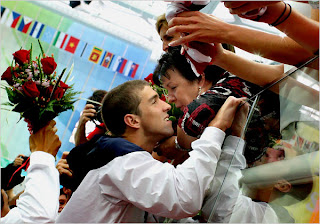 I am thrilled to see local sports hero Michael Phelps show how great an athlete he is and can't help but enjoy seeing the emotions and pride of Michael's Mom as she roots for him from the stands.  Every parent who has watched one of their children play a sport can relate to how nerve raking this experience can be.   I can't imagine how much more heightened this must be to see your child on a world stage.  And who couldn't smile at seeing Gabrielle Douglas show her youthful enthusiasm and great smile in beating the world's best gymnasts.
But on the other hand I remember when the Olympics meant rooting for American amateurs competing against the "professionals" from the Soviet Union and other Eastern Block countries. 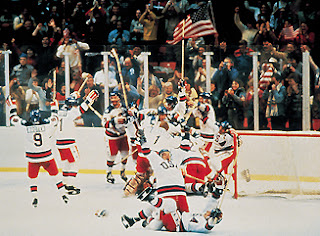 Who could forget the 1980 US amateur hockey team beating the Soviet Union and winning the gold metal?  We were "David" to the Soviet Union's  "Goliath."  A real life Rocky movie.  But with the breakup of the Soviet Union and the introduction of American professional athletes the roles have reversed in the past few Olympics.  Somehow I can't find myself rooting for the Kobe Bryant, Carmelo Anthony, LeBron James led US basketball team beating up on mismatched teams from other countries. I actually find myself hoping some other country might play their "game of a lifetime" and sending a message to these over-hyped, over-payed professionals.
It also seems that the coaches from the countries that produced the past foreign dominant teams have all migrated to coaching the American athletes.  Coaches, like professional athletes, go where the money is. The best coaching and training facilities have tipped the competition in the United States favor.  Has the US Olympic team become the New York Yankees and we win by outspending our competition?  It is probably unrealistic to think that the Olympics will ever return to its amateur model when the Olympics have become another money-driven corporate entity.
It also seems that the size and expense of the Olympics, especially the Summer games, has become so expensive to host that only a handful of countries have any realistic chance to host the games.  For most of the world's athletes competing in the Olympics will be an "away game."
Call me a socialist but I would like to see some type of revenue sharing plan for the Olympics (like the NFL) that gave talented athletes from all countries the same competitive resources.  And to tell LeBron that winning an NBA title in the professional world should be enough glory for him in one year.

P.S.
If you want to see an amazing Olympic story look at this.


P.S.1
The US and Jet Propulsion Lab have a lot to celebrate in its successful landing of the Mars Curiosity Rover.  Amazing feat!  See the animation of the landing

Heard the report of the landing and first pictures.


P.S. 2
From the Columbia Association:
Columbia Association (CA) has scheduled a public information meeting on the proposed construction of a new clubhouse at the Hobbit’s Glen Golf Club in Harper’s Choice. The meeting will begin at 7 p.m. on Monday, Aug. 20, at the current clubhouse at the Hobbit’s Glen Golf Club, located at 11130 Willow Bottom Drive.
This meeting is required by Howard County’s Department of Planning and Zoning to satisfy the public information requirements.
The meeting will include a discussion of the new architecture and site plans for the new clubhouse, and members of the public will have a chance to see the concept plan for the proposed clubhouse as well as the concept site drawings. In addition, details will be provided letting people know how they can stay informed about these plans as they make their way through the county government approval process. There will also be a question-and-answer session.
This proposed project would bring a first-class clubhouse to go with a first-class golf course, part of CA’s ongoing effort to continue to maintain and improve all of its facilities to meet the needs of the community. The CA Board of Directors has approved $5.85 million for the complete rebuilding of the Hobbit’s Glen Golf Club Clubhouse. A new turn house will also be built.
The project is currently in its design development phase, which includes the permitting process. Construction on the new clubhouse is projected to begin in early 2013 and be completed by fall 2014.
For more information, please visit ColumbiaAssociation.org/hobbitsglen
Posted by duanestclair at 4:41 AM