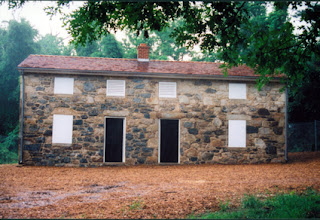 "The public is invited to Woodlawn Slave Quarters, located near Bendix Road in Columbia, for a rare opportunity to examine a historic renovation project and glimpse at what life might have been like in Howard County in the 19th century.
The stone building was restored by Columbia Association (CA) in 2007 to preserve a piece of history. The building is believed to have been constructed in the early 1800s. While there is no definite evidence that the building was built or used for slave housing, it is known that the owners of the property during that period owned slaves.
The construction material is primarily field stone, but the hand-hewn, quarried cornerstones — or quoins — are indications of the fine quality of the original construction.
Woodlawn Slave Quarters is not often opened to the public. The site is being opened from 10 a.m. to 1 p.m. on Sept. 15 as part of the annual Columbia BikeAbout though visitors don’t have to participate in that event to view the building. Nearby parking is available. Volunteers will be on site to guide visitors through the two-room structure, and interpretive signs will help explain the history of the building and life in Howard County during that period.

Watch this video about the Woodlawn Slave Quarters that aired on Columbia Matters in 2010."

P.S.
The blogging community is getting behind an effort to help the merchants of Main Street Ellicott City survive the train mishap this week by encouraging everyone to patronize these merchants this week.
Posted by duanestclair at 6:20 AM