Corn and tomatoes: What we all what for Summer to bring us 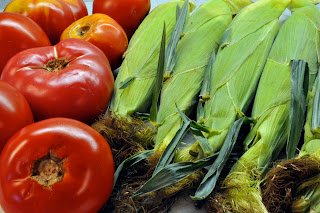 This year the weather must be affecting the corn and tomatoes.  As I have blogged my efforts to grow some tomatoes this year have mostly produced small green tomatoes to date.  I know that some of that is because of the yard I have that limits the amount of sunshine the plants get but the tomatoes I have purchased at farmers markets have also been disappointing on flavor.  I know that some folks are getting ripe tomatoes but the ones I have bought at the farmers markets don't taste much better than the ones I buy in the stores.
Same thing with corn.  The past couple of years I have been very pleased with the sweet corn that Giant sells.  It has been very sweet especially if you are lucky enough to be shopping when they are putting out the new ears from the crates.  But this year the corn has been inconsistent and generally less sweet.  Is it the dry conditions?  I have tried corn from 4 different stores and even bought some a a roadside stand on the Eastern Shore.  Nothing so far has been like the corn I have purchased at Giant in previous years.
At least the crabs have been good this year.

Posted by duanestclair at 6:31 AM

Are you able to get to any of the local farm stands? Baugher's (on New Cut Rd) has wonderful corn and I've heard good things from the stand in front of the hardware store in Clarksville.

Tomatoes are so-so. For the first time in many years, we have some in containers on our deck that taste great. No idea why, but we are enjoying them. Don't even know what kind they are, my brother had too many plants and gave us 3. His tomatoes are not doing well at all.

Some of my tomatoes at doing well. Some aren't. After all the rain, they are getting watered down. In July, they were better.

As for corn, the best corn we had this year was from Rizzmull's at the county fair. It was corn the way we remember it. Silver queen type of corn.

Others aren't as good.