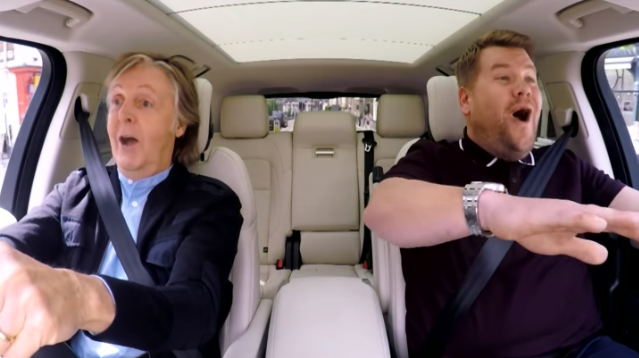 If you haven't heard this video take 20 minutes and enjoy the memories of McCartney songs.
Posted by duanestclair at 4:48 AM No comments:

With the callousness the Trump administration has shown to families trying to enter the US through its "zero policy" of separating children from their parents one is reminded how much callousness to people during Hurricane Katrina hurt the George W. Bush administration.  One of the lessons learned after Katrina was how many people would not evacuate New Orleans because they couldn't take their pets with them when they evacuated.  That reality probably led to some of those pet owners dying after the storm.  With that lesson learned FEMA established a protocol for pets that would be separately evacuated and then reconnected with their owners after the disaster.


Since Katrina pet owners are given barcoded wristbands that are matched with bands on their pets.  A system is put in place to track where both the pet owner and their pet are located.  Moving the pet owner or the pet form one location to another gets scanned into the system.  This allowed pets to be sent to animal shelters over a wide area of the US without losing the ability to reconnect the pets with owners.
Earlier this year HHS had to admit that they could not account for the location of 1475 children separated from their parents after they entered the United States and taken into custody by the Border Patrol.  The Administration took offense at these children being described as "lost" but they had to admit they could not give an address where these children were. 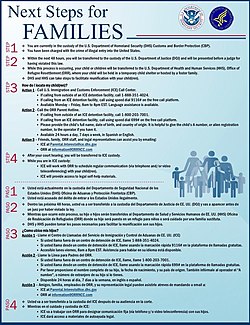 So the Trump Administration now tries to reconnect children with their parents by giving the parents a sheet telling them about a phone number they can use to reconnect with their children.  As their children are scattered across the United States in at least 15 states with many different agencies how well the tracking system will work is anyone's guess.   This is especially true for younger children who maybe too young to talk or know much family information.  Apparently not enough thought was given to how this system would work before the policy was implemented.  And this is after the policy was being discussed since February 2017.
Apparently our Government has a well planned protocol for reconnecting pets with their pet owners but is still working though a system for reconnecting children with their parents.  This disaster is not over with the change to not separating families at the border with Trump's Executive Order (which he had been saying he didn't have the authority to do).   The Executive Order did not say if or how the children already separated would be reconnected.   You can be sure that some of the parents will be deported before being reconnected to their children.  I wouldn't be surprised if immigration attorneys would ask judges not to deport before their children are reconnected.  Should be interesting legal times.

P.S.
Trump has never been know for intelligent thought or speech.  I have heard high school dropouts who had more coherent thought patterns.  Yesterday his choice of words fit this pattern and tells a great deal about his parental feelings for children.  Here is the quote of his.

"If you took zero tolerance away, everybody would come right down. They'd be getting their little belongings, unfortunately, and they would be heading up. You would be - you would have a run on this country the likes of which nobody's ever seen."

I guess we shouldn't be surprised that a man who has 4 children with 3 wives (each of whom he cheated) would describe children as "little belongings."  Good God how did our Country get here!

P.S. 1
Speaking of thought patterns of Trump ever notice he keeps using the phrase "nobody knew" when he really should be saying "I never knew."

Posted by duanestclair at 11:30 AM No comments:

Those who do not learn history are doomed to repeat it

Posted by duanestclair at 5:07 AM No comments: After last week's horror show in Canada at the G7 conference I know I feel like apologizing to Canadians for our childish leader. We have to live with having a "crazy uncle" representing our Country. Twitter even has a new hashtag for us to use. #ThankCanada for things we love they've brought to our lives. I'll start: #ThanksCanada for @NeilYoung, @JoniMitchellcom, #LeonardCohen, @celinedion, alextrebek, K.D Lang, Dan Ackroyd , Elon Musk
I have blogged before about how if the Confederacy had won the Civil War the remaining United States would be far more like Canada than we are now. We would have a more universal health care system. We would have been a far more welcoming country for refugees leaving war torn countries.
I took a look at what the US Congress would look like if the rebelling states were not in Congress. Since most of the representatives from those states are Republican here is what our Congress would look like. The Republicans would loose 59 House Representatives and 12 Senators. Congress would look and act very differently. Trump also would not be our President because he received over 100 electoral votes from those Southern states. I guess it is the price we pay for winning (?) the Civil War.
Posted by duanestclair at 9:35 AM No comments:

To Russia with love OK it is now too obvious that Russia and Putin have something that they are using to blackmail our "Buffoon in Chief."  His latest example is him saying that Russia should be brought back in the Western leaders Global meetings .  I am not sure why that is needed if Trump is in the G7 meeting.  Seems to me that Russia's interests will be well represented by their lackey Trump.

P.S.
Maybe it is time for the other countries to kick the US out of their summits too until we get rid of Trump.  Sometimes you have to choose who is a friend.
Posted by duanestclair at 9:31 PM 8 comments:

We have gotten used to being a great community in which to live.  Money Magazine consistently votes our County as either the 1st or 2nd best place to live.  Our library system was recently selected at the best library in North America.  Now our School System was listed by Forbes Magazine as the 29th best place to work in America.  We are the highest rated public school system in the Forbes ratings.  I would add as a former Howard County employee that the Howard County Government could also fall into this "best employer" category.  You only have to deal with other jurisdiction systems to realize how what we have in Howard County is so special.

P.S.
I would be remiss if I didn't give thanks to Jim Rouse who set in place so much of what makes our County so special.


Posted by duanestclair at 3:49 PM No comments: 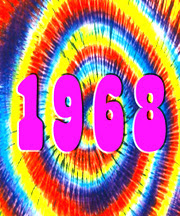 1968 was probably the most formidable year for me growing up.  It was the year I graduated from high school and that means I will be headed back home this Summer to my 50th class reunion.  As this is the first reunion I will have attended it will be strange seeing fellow graduates who I remember as a 17 or 18 year old.  Facebook has given me an idea of how some of my classmates have aged.
What brought back some memories of that year was the assassination of Bobby Kennedy exactly 50 years ago.  I was awakened by a call from my Grandmother at 5 am telling me to turn on the TV as Bobby Kennedy had been shot.  Somehow the preparations for my graduation later that week suddenly seemed insignificant.
In 1968 as an 18 year old male I had to register for the draft but couldn't vote till I turned 21.  Being drafted to fight in Vietnam without being able to vote was the main reason the voting age was lower to 18.  When I see the reaction of high school students to school shootings today I remember the reactions I had to the assassinations and a foreign war that were played out on the television every night.  The turbulence of that year culminated with the police violence at the Democratic National Convention that Summer.  1968 was a seminal year for many of my baby boomer generation as we went off to college or get drafted.   50 years later 2018 seems to be headed toward the same type of turbulence that will have current 18 year olds feeling the same way 50 years from now.

P.S.
The idealism that struck a cord with so many of us back then is best heard in the words of Bobby Kennedy from a speech he gave in South Africa.   Oh to hear this type of speech today!


Posted by duanestclair at 9:16 AM No comments:

Prepare for Success Backpack program is back

Prepare for Success is entering it's 17th year of assisting the community in providing students in Howard County with backpacks and supplies.  12,553 Howard County students come from low income families and many of these have difficulty providing school supplies for their children.  You can donate to this worthy cause by sending a check payable to Community Action Council/PFS and sending it to the Community Action Council at 6751 Columbia Gateway Drive, Columbia MD 21046 or donating online at this link.  Select the Prepare for Success in the "donation restriction" drop down menu.

#hocoblogs
Posted by duanestclair at 8:41 PM No comments: