With the past few months in Presidential politics it is nice to remember a time before "fake news" and had a "real" scandal.
Posted by duanestclair at 5:08 AM No comments:

How do you define Southern heritage?

This past week we have been told that the battle over Confederate monuments is not about race and slavery but Southern heritage.  So what exactly is the "heritage" that opponents of the monuments are honoring?  I can understand a Southern heritage that relates to Southern cooking, a regional dialect, politeness and hospitality.  Even a Northeastern liberal like myself can appreciate the value of the Southern slower pace of life.  What I would question is the use of the Confederate flag and war monuments that represent the defense of a heritage that had human bondage and brutality as a daily reality.   While an exact number can never be known exactly the existence of slavery in the United States undoubtedly resulted in the death of  hundreds of thousands or even millions of slaves.  The symbolism of the Stars and Bars Confederate flag is no different than the Nazi flag representing the deaths of millions of people.  It is no coincidence that both flag get carried side by side in these protests.  Both represent oppression and death. 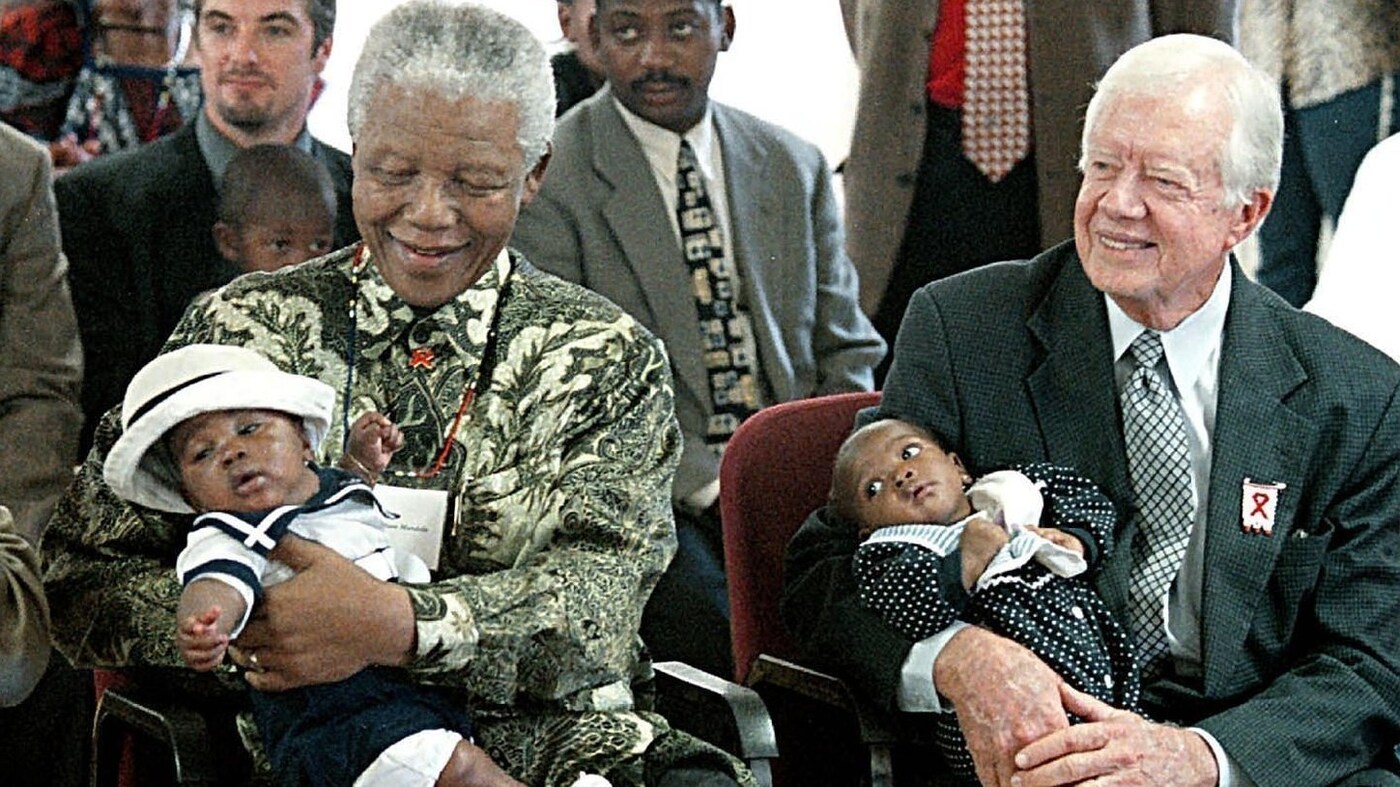 Trump's election and his subtle and sometimes overt support  for those with racial bias and hatred only shows how immoral he can be in achieving his goals.  It makes me think of a Bible verse. " For what shall it profit a man, if he shall gain the whole world, and lose his own soul?"  Karma Donald, karma.

The solar eclipse was more than expected 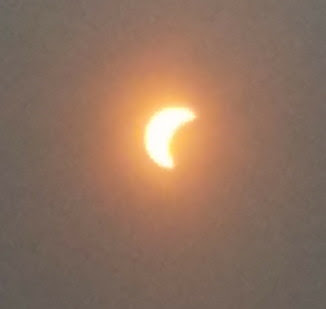 While we didn't get a total eclipse in our area the viewing of the eclipse was one of those experiences that made a lasting impression.  It was enhanced by having the glasses for viewing so that you could notice the changes as they occurred.  Fortunately the clouds held off enough for viewing. 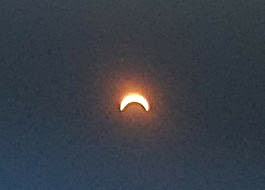 Posted by duanestclair at 4:30 AM No comments:

This is what we will see in Howard County.

Most of us can remember the Glen Campbell show back in the early 1970's.  What you may not know is that he played guitar for a number of other bands including the Beach Boys and Elvis Presley.  Here are a couple videos of his playing talent.  William Tell Overture   Ghost Riders in the Sky with Roy Clark.

It gets serious now

I have a link on my computer to a radio station that does a "question of the day."  I can't help but notice how many of the questions are about a difference between men and women.  Not infrequently the question refers to how men overestimate their abilities and women underestimate their abilities or how men make decisions without consulting with others and women prefer to make decisions collectively.  It took women in the Senate to stand up to the President and his male Senate allies on the health care legislation .
Recently this reality again showed up in our "bully in chief" threatening to bring "fire and fury" with his threat of nuclear war.  For all of Hillary's tough talk I doubt she would be this stupid.  It is one thing for Trump to cheat his contractors, only tolerate people who proclaim their devotion to you and to make up names for your opponents but it is another thing to think that the world would be better off destroying an entire population on the Korean peninsula and who know where else.  Once you start down that road accidents can happen that no one expects. If you want to see how that happens all you need to do is read Barbara Tuchman's book "The Guns of August."  A world with building conflicts that set off World War I by an assassination of the heir apparent to the throne of the Austria-Hungary empire Archduke Ferdinand.  Nobody wanted it and no one thought it would happen but it did.  Once the threat genie is out of the bottle it is hard to put it back in the bottle without looking like you are weak.  We all know how Trump feels about looking weak and his own sense of personal inadequacy .  Trump with nuclear weapons is beyond dangerous for the world.

P.S.
Chinese proverb:  He who seeks revenge builds two graves.
Posted by duanestclair at 4:31 AM 4 comments:

Ellicott City is situated in a valley that funnels water down Main Street and is along a river that floods.  This reality has been a fact of life since Ellicott City was founded.  Patapsco River flooding has not been the problem recently.  The runoff from the surrounding hills being funneled down Main Street has been the source of the recent devastating floods in Ellicott City.  The development on the surrounding hills channeling more rain water and climate change seems to make this flooding something that will occur more frequently in the future.  To address this issue the County has launched a process to mitigate the problem.  That is the good news.  The bad news is that 6 inches of rain in short amount of time will probably cause major flooding even with the proposed changes.  Here is the information on the Master Plan.

It will also incorporate a watershed plan in a way that many traditional master plans do not. Ellicott City’s unique topography, hydrology, road network, and mill town heritage will require a tailored, well-planned roadmap for long-term rebuilding. A Hydrologic and Hydraulic Study (the "H&H Study") was recently completed for the Ellicott City watershed. The H&H Study is an unprecedented, comprehensive analysis of the Tiber-Hudson watershed. The analysis models how certain water retention controls and channel enhancements will reduce the amount of flooding on Main Street in various storm conditions. The results of the hydrologic and hydraulic study will be used as a touchstone throughout the master plan process and help guide decisions, set planning parameters, and test choices."

Premier of the documentary "Columbia at 50" September 13th

The Premier of the documentary Columbia at 50, a bridge to the future will be on Sept 13 2017 at the Smith Theater join Josh Olsen author of Better Places Better Lives, free tickets at columbia50movie.eventbrite.com

Posted by duanestclair at 9:22 PM No comments:

If you watch any of the cable news shows you have undoubtedly seen the commercials for TD Ameritrade where the advisor talks about everything but your stock portfolio.  He comes across as a therapist or close confidant.   I think that is why he has a beard and a sweater.  I almost wait for him to say "so how was your relationship with your parents."
If you wonder why these companies are taking this tack in their commercials you only have to understand that index fund investing is eating into the financial advisor investing business.  Now that we know that advisors charging us substantial amounts for advice that can't beat index funds the financial advisor companies are having to give us another reason to have an advisor.  Think of your financial advisor as a life coach.

P.S.
The Obama Administration proposed a rule to require advisors to tell you if they are a fiduciary.   Simply the "fiduciary rule" was a consumer protection rule that:

"...... demands that advisors act in the best interests of their clients, and to put their clients' interests above their own. It leaves no room for advisors to conceal any potential conflict of interest, and states that all fees and commissions must be clearly disclosed in dollar form to

So it is not surprising that the pro business/anti consumer Trump Administration is trying to stop this rule from going into operation.  I guess financial advisors winning is more important than consumers winning.
Posted by duanestclair at 4:46 AM 2 comments:

This week I happened to hear these two stories of note for men on NPR.   The first is this story on the dropping sperm count for men in the past 40 years.   The report states:

"Sperm counts appear to be plummeting throughout the Western world, according to a large study of men around the world.  An international team of scientists analyzed data from nearly 43,000 men in dozens of industrialized countries and found that sperm counts dropped by more than half over nearly four decades.  "I think that we should take this very seriously," says Shanna Swan, a reproductive epidemiologist at the Icahn School of Medicine at Mount Sinai in New York. She helped conduct the study published in the journal Human Reproduction Update. "I think it's a wake-up call," Swan says."

Later that day they had a report that scientists are discovering more species of animals where females can self fertilize.  Those tricky females!  For human males we better hope women don't learn how to solve their own computer issues in the near future or we are really done!

It's been awhile since we have had a blog party so it is good news that we have one at Bare Bones Grill in Ellicott City on August 21st.  Here is the link for tickets.

What has a shorter life expectancy than a fruit fly?

What's the difference between the Trump Cabinet and The Game of Thrones?

With The Game of Thrones you have to wait till the next week to see who gets killed off.


#hocoblogs
Posted by duanestclair at 4:58 AM No comments: