Good bye Lance ---It only leaves us with Cal 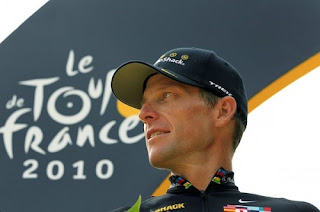 Certain athletes attain a status that far surpasses their accomplishments in their individual sport.  Lance Armstrong was one of those athletes with his survival from cancer and his work on behalf of cancer survivors.  How many of us can name any of the cyclists in this year's Tour de France?  Every year that Lance raced I would watch the summaries of the daily rides to see how he did.  Now it is just a European sporting event like the soccer (football!) World Cup.  Even his name, Lance Armstrong, sounded like a fictional superhero. Now he is brought down to earth as another athlete who felt that to compete he needed to go the drug route.  Heroes with feet of clay.

But we still have Cal to look up to and serve as an example to our children.  Thank God for Iron man Cal.
Posted by duanestclair at 4:46 AM

Maybe he decided that it just wasn't worth it to fight anymore. The high cost to litigate this could very well bankrupt him and his foundation. The only people who would be getting rich from this would be the lawyers involved. What good would it be to have your titles/awards/medals yet have no money left to support your family or your cause? He still stands up and says he is not guilty...he has the drug tests to prove it and that's good enough. I think he is being a very smart man in thinking of his family first and his foundation second.

I too would like to think that Lance was doing this for other logical reasons but the fact that 12 cyclists were ready to testify to his use of banned substances speaks volumes. I will always admire his work with cancer survivors and the great work of his foundation but am sad to see how another sport has been tarnished by drugs.

And there are probably 12 other cyclists ready to testify that there was no doping. Over 500 drug tests and all clean. How could he game the system that many times and not get caught? Every sport is filled with poor losers, haters and wannabe's.