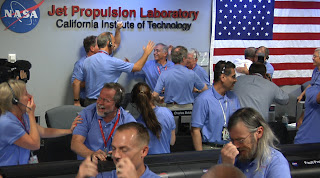 We have all seen the photos like the one above of the celebration at the Jet Propulsion Laboratory in Pasadena when the Odyssey rover landed on Mars.  But did you know that we have many Howard Countians who have been involved in a number of interplanetary space missions? 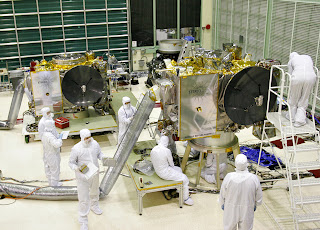 As you can see in the photo above from the John's Hopkins Applied Physics Lab (APL) has probably one of the most successful interplanetary mission track records.  APL's story is explained in a paper by S. Arnold, J. Suter, D. Watson of APL:

" The Space Sector at JHU/APL is responsible for solving challenges within the entire space realm. This covers all low-earth, medium-earth, and geosynchronous orbiting platforms. Beyond that, the Space Spector includes all JHU/APL Deep Space Planetary missions. Additionally, the Space Sector is bifurcated into the Civilian Space Business Area (CSBA) and the National Security Space Business Area (NSSBA). The CSBA concentrates on civilian sponsors and challenges (such as NASA, NOAA, and NSF) whereas the NSSBA focuses on sponsors and challenges within defense and intelligence communities. So we have a Space Sector with two distinct yet complimentary Business Areas, garnered by a common set of underpinning technologies."

APL's first involvement began on Sept. 17, 1959, when a little heralded Thor Able rocket launched from Cape Canaveral in Florida. Perched atop the rocket was Transit 1A, a satellite designed by scientists and engineers at Johns Hopkins’ Applied Physics Laboratory that the U.S. Navy hoped would provide accurate location information to ballistic missile submarines and be used as a general navigation system.

One story that I find fascinating and explains how things work at APL was how the concept of Global Positioning Systems (GPS) originated at APL. As the Johns Hopkins University magazine tells the story:


"It was October 1957 and the Soviet Union had just launched Sputnik, the first man-made satellite to orbit Earth. America worried and the world watched as the U.S.S.R. took the lead in the space and, possibly, arms race. William Guier and George Weiffenbach listened. The two junior physicists at Hopkins's Applied Physics Lab (APL) had lunch together the Monday after the launch. They noted that no one at the lab had tuned in to the satellite's signal as it orbited the globe. So they did. Using a highly sensitive shortwave receiver and a piece of wire, Guier and Weiffenbach rigged up a listening station on the roof. As the satellite passed overhead, they recorded the beep-beep sound and heard a change in the radio frequency of its transmitter--a shift known as the Doppler effect. Guier theorized they could determine the satellite's precise orbit by analyzing the changing slope of the shift. It worked, and they tracked Sputnik, Sputnik II, and later the first U.S. satellite, Explorer I, numbering among the few scientists across the globe accurately to do so. But tracking satellites wasn't exactly in their job descriptions. "

"In March 1958, their boss, Frank McClure, director of APL's Research Center, called the two into his office and shut the door. "That was always an indicator of either something very classified or something important or both," Guier recalled in a recent APL documentary. "And he challenged us," Weiffenbach says. "He asked us if we were diddling or was what we were doing genuine. Intrigued, director McClure posited: Could one reverse Guier and Weiffenbach's tracking method and help ships navigate? "If you can find the orbit of a satellite, you sure as hell can find the listening station on Earth from the orbit," McClure later said, according to APL--Fifty Years of Service to the Nation, by William K. Klingaman. In other words, if navigators knew the satellite's location in an orbit and the precise time of its passing, they could use the Doppler effect to compute their own location. This was no small revelation. Poor weather conditions would no longer cause ships to routinely stray off course. Up to this point, after all, navigators were still relying on dead reckoning and celestial navigation. McClure and fellow APL scientist Richard Kershner went home and in a weekend created the blueprint for the first such satellite navigational system, which APL, led by Kershner, developed for the U.S. Navy's Polaris nuclear submarine program. "

"The Transit system, in continual use by the Navy for more than 30 years until 1996, also served merchant marine captains, oil rig platform chiefs, and other civilians in need of all-weather navigational aids. The technology spawned a number of firsts, including the first multiple-spacecraft launch and first satellite computer, according to APL. The system, along with later navigation satellites, also paved the way for the more precise and sophisticated Global Positioning System (GPS). Today, people ranging from Department of Defense technicians to auto drivers and backpackers can get a navigational fix anytime using GPS's portable receivers. 'Transit demonstrated results. Without it, GPS could have taken another 10 years,' says APL chief scientist and former director Alexander Kossiakoff, who points out that Transit also shifted APL's focus. Transit launched APL into the space program and space science."

P.S.
On Tuesday the Centennial Fun Run had its annual Night Out and Chalk Night.  Arleen Dinneen has been hosting this Run for the past 34 years. 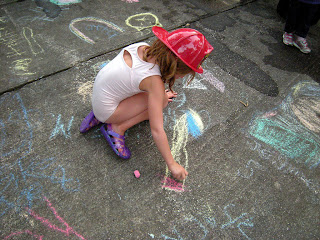 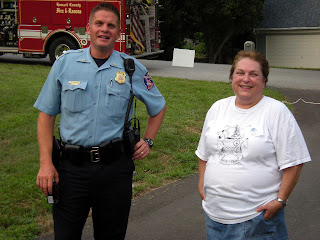 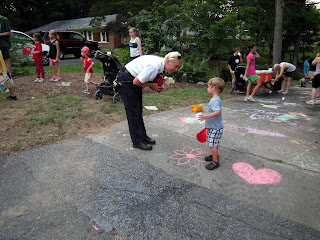 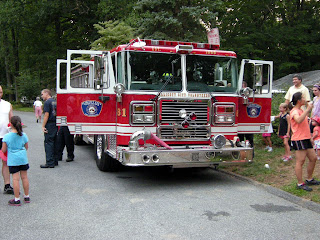 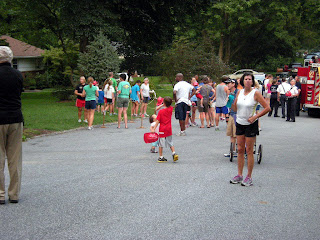 Posted by duanestclair at 4:32 AM