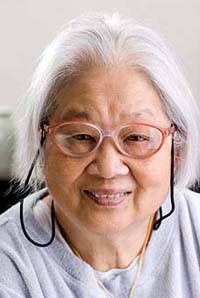 Health causes seem to come and go in popularity.  Alzheimers disease was once the cause of its time, AIDS had its time, breast cancer was "the" disease that rallied people.  Not the new cause seems to be obesity.  Michelle Obama, the AMA and locally the Horizon Foundation have all given this cause greater visibility as  a public health issue.  Getting Americans to adopt healthier life styles is seen as our number one public health goal.  Who do we look to to identify the lifestyle to be adopted?

Over the years of running Columbia's paths I have noticed the large number of elderly Asian persons walking the paths usually in small groups.  I have also watched an elderly couple doing Tai Chi by the dock at Lake Elkhorn. Walking and Tai Chi seem to be a life long form of exercise for this population.  Walking and healthy eating maybe why this segment of the world's population have some of the longest life expectancy.   According to a United Nations Development report, "  With an average life expectancy of 83.2 years, Japan easily beat out Hong Kong (82.5 years) and Switzerland (82.2 years) for the top spot."

According to Diet.com, " The Asian diet is an ancient and time honored way of eating. For thousands of years people of the Asian world have eaten a diet based on plant foods such as rice, vegetables, and fresh fruits. Unlike Western diets, meat is rarely the main dish of any meal but rather an accent and flavor compliment. Fish is often eaten in main courses. In many Asian cultures diet is closely related to religious practices and tradition. It is an extremely healthful diet. Asian populations who have access to a sufficient variety of traditional foods are some of the healthiest and longest lived people on Earth. Many chronic illnesses that plague Western cultures such as heart disease, cancer, and obesity occur rarely in these cultures."

Unfortunately many of the Asian restaurants that serve Americans stray from the traditional Asian dishes to make them more palatable for American tastes.  Frying and sauces too often take away any of the healthier aspects of Asian food choices.  The following information from the website One Result gives us a look at this reality:

"Egg Rolls: As an appetizer, this is the absolute worst. Not a single real "egg" insight. Even the veggie version has about 250 cals and 65% of calories from fat, which we know is going to be mostly saturated and trans-fat (the bad kind!) On the bright side, there are tons of other starters that make much healthier choices, including: wonton, egg drop, or hot and sour soups, steamed veggie dumplings, and spring rolls or lettuce wraps. Just steer clear of those thick dipping sauces – they tend to be surprisingly high in calories and/or sugars."

"Lo Mein: Wanna know what gives it that glowing brown hue? All of the oil it has absorbed from the pan! According to an independent lab analysis done by Center for Science in the Public Interest, one plate of these noodles has 1,100 calories, 40 grams of fat, and 3,500mg of sodium... that’s almost two days worth of salt! And, if you can believe it, the Chow Mein and Chow Fun noodles are even worse. If you care deeply about the health of your heart, arteries, brain, etc. stick to noodle dishes that are not “crispy” or “fried” and choose steamed white or brown rice instead. Just keep in mind that a typical mall food court will serve about 2-3 cups (aka too much) rice with your meal."

For anyone looking to have a healthier Asian meal I would recommend  sushi at Sushi Sono and  Vietnamese food (noodle dishes and soups are very good) at Pho Dat Thanh.  To try Tai Chi try the classes at Acupuncture Works.
Posted by duanestclair at 5:59 AM

The Japanese also tend to walk and bike much more for transportation. If you pass a high school in Japan the front parking lot is full of rows and rows of bicycles. I have yet to see that at an American high school!

Don't abandon the Chinese restaurants around here. Even if you want to avoid heavy sauces and fried food, you can eat well. Nose around the vegetable offers and the 'authentic' dishes. Food at Grace Garden in Odenton always seems lighter and fresher -- even though it is flavored with treats like slices of pork belly. Go with fish noodles, a vegetable special.

In Howard County, I have had delicious stuff at Noodles Corner and Red Pearl. Both have 'authentic' menus and offer simpler, delicious vegetables that you can pair with an indulgent plate.

I don't figure restaurant food will ever be as healthy as stuff people make at home. We just eat more. They just use more salt, sugar, fat. That's why it's special.