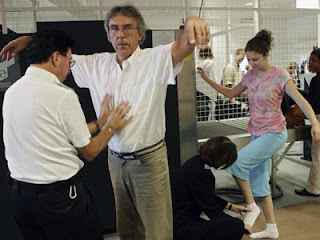 We have all lived with the increased security that has been a fact of life since 9-11.  We have accepted empty our pockets, taking off our shoes and even pat downs at the airport.  Getting into federal buildings in DC almost always requires going through a metal detector. Remember when you could walk into a state or county office building without signing in? 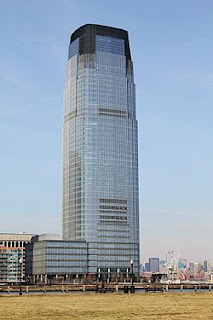 I remember running past the building above in Jersey City (the tallest building in New Jersey) and noticing all the security and barriers to get into the building.  I looked for a sign to see who was in the building but there was no sign.  I finally stopped to ask a security guard who was in the building and I was told it was the headquarters for Goldman Sachs and the company didn't want to advertise the fact.  Notice how it seems to be incomplete at the top?  The building was under construction when 9-11 happened and they decided that completing it to its planned original height might make it a target for terrorists. 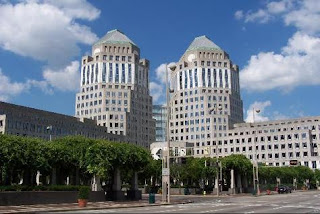 Anyone guess which Fortune 500 company headquarters this building is?  Try Proctor and Gamble.  When I was in Cincinnati a few years ago I thought I would go by the building as I worked summer jobs at a P&G plant when I was in college.  The strange thing was that there were no signs around the building to identify the headquarters.  I later learned that the signage was taken down a few years before when conservative religious groups ran a campaign saying that the P&G logo with the crescent moon and stars was a sign of satanic worship.  The concern of an attack against the building brought the signs down. 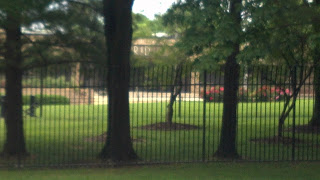 Here in Columbia we have not been untouched by this increased security at some of our buildings. Notice the iron gates and manned guard gates at some of the buildings in Columbia like the one above? 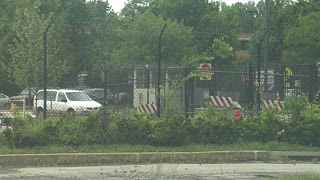 This Columbia building even has razor wire on top of the gated fencing.  It is hard to tell what these buildings are but no one would be surprised at top secret work being done in our community.  With the new 5 billion dollar NSA facility now being built at Ft. Meade we shouldn't be surprised that some of the private contractors of NSA would be locating new offices in our area.

I just wonder sometimes if the money being spent for all this increased homeland security isn't turning us into an overly paranoid country.

P.S.
Tonight is a meeting of the Columbia Association Connecting Columbia group.  From their email about the meeting:

" Come, learn about and discuss the preliminary recommendations for Connecting Columbia -- CA’s Active Transportation Action Agenda. This is your chance to shape the recommendations to improve connectivity for pedestrians and cyclists in Columbia before they are finalized.

Please join us on May 23rd at The Other Barn (5851 Robert Oliver Place Columbia, MD 21045) at 7:00pm for the Connecting Columbia public meeting. CA’s consultants will present preliminary recommendations. Registration is appreciated, but not required. If you have any questions, please contact Scott Templin at 410-715-3166 or Scott.Templin@ColumbiaAssociation.org."

Posted by duanestclair at 6:07 AM