The controversary over parenting techniques seems to never end! 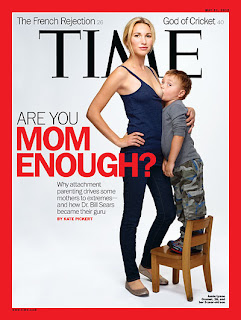 I don't know about your family but the Time cover article last week that showed a mother who still breastfeed her 3 year old has been a big topic of our family discussions this past week.  Of course it helps that 2 of my daughters are pregnant and my daughter-in-law just gave birth to our 4th grandson last week.  With my one daughter who is due anytime now knowing that she is having a boy we are sure on a run of boys in our family.  Somewhere out there I am sure that someone is having girls to balance things out.

Each generation has new theories on the role of parents or more accurately the role of mothers.  From Dr. Spock and formula feeding of my parents generation to the greater role for men in parenting and the return of breastfeeding of the 1970's and 80's we are told there is a right way and a wrong way to raise children.  Start a conversation on the proper use of discipline with children in a group of parents and you will get a heated discussion of the manner in which to use discipline.  It will run from the "my parents spanked me and it didn't harm me" belief to the parents who use "time outs" and "positive direction." Last weeks Modern Family had a very funny scene on this area.

One of the most controversial areas with the Time article dealt with how to respond to a crying baby. Dr. William Sears the author of "The Baby Book" presents the case for responding to your child whenever they cry by holding the baby to comfort them.  This flies in the face of the belief that children should learn how to comfort themselves and not expect constant attention from a parent.  Of course most parents take a tract that is somewhere in between.  From personal experience I know how tiring it can be to get up to comfort a crying child 10 or 12 times a night (yes my wife did most of the comforting).  Exhaustion caused us to let our children cry at night so that they eventually learned to sleep through the night.  In a similar fashion we gave up on not using a pacifier to comfort a crying infant.  No one who hasn't tried to comfort a crying infant for hours can ever judge a parent using a pacifier.  That doesn't mean that seeing a 3 or 4 year old with a pacifier isn't maybe overdoing it.

As the picture on the Time cover shows the final controversy of the article was on breastfeeding.  The topic of women breastfeeding in public seems to sharply divide much of our population. This has become more of an issue with women now returning to the workforce soon after giving birth.  The use of breast pumps and having special rooms in the workplace are becoming the norm for more working mothers.  The length of breastfeeding has now become a badge of honor for mothers.  The example of 3 years with the mother in the Time cover maybe extreme but the American Academy of Pediatrics recommends at least 6 months.

You might think it is usual for a male blogger to be blogging on this topic but the reaction to the Time article that I had was that it still mostly involved the predominate role of the mother in parenting.  It did have a sidebar on fathers but that was mostly an afterthought.  What is it in the male makeup that doesn't recognize the importance of our role in raising children.  Is it all about testosterone and estrogen?

P.S.
A few years ago I was a volunteer on the Family Tree Parent Stressline.  While it was originally designed to lessen child abuse it evolved into an I&R service for parents looking for all types of support services.  Birthing classes, counselors for ADHD and how to deal with teenager issues were common calls.  If a resource existed where parents could send their teenagers for awhile that would have been a very popular service.
Posted by duanestclair at 6:02 AM

Great post! I think the more men talk about fathering, the better. Sure, some men need to step up their parenting contributions, but my assumption is that the "national conversation" (portrayals on TV, in commercials, in the media, etc.) really marginalizes fatherhood. It's not fair or helpful to fathers, mothers, or children.