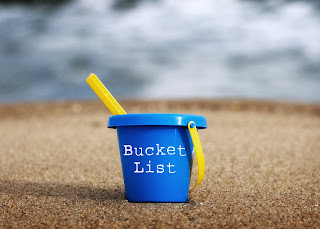 I recently read a report about a woman who had created a family bucket list.  Most of us are tired of hearing about these types of lists but somehow a family bucket list sounded worth considering.  The whole idea of a bucket list first started in 2007 with the movie "The Bucket List" starring Jack Nicholson and Morgan Freeman as two elderly patients who wanted to do things they had missed before they died.  A movie with two of my favorite actors was enough for me to see it and it was mildly entertaining.

Of course creating a family bucket list is a little more complicated for me with my children out of the house and scattered around the country.  It would have been easier when they were children living at home.  I guess my list would include those things that I have always fantasized about doing with the family if I won the lottery.  My quick list would look like this:
1) Taking the entire family to tour Italy that would end with a visit to each of the towns alone the Amalfi Coast.
2) Family hike to the bottom of the Grand Canyon
3) Attending the New Year's Eve celebration in Times Square and then flying overnight to Pasadena California for the Rose Parade the following day
4) Pizza dinner at Grimaldi's in New York followed by a Broadway show
5) What list would be complete without the family visit to Disney World?

Any thoughts on an item you would put on your family bucket list?

P.S.
Register for the Library's 5K run
Posted by duanestclair at 5:57 AM