With over 95 miles of paths Columbia has one of the most connected systems for walking or biking.  Now the Columbia Association has been holding meetings to get community input into improving the current system with a possible addition of 45 to 50 more miles of paths.  Given the large attendance at these meetings it is apparent that the path system is an important amenity for many Columbians.

The current system has some gaps the require walkers and bikers to use roadways to reconnect to other paths.  The areas that seem to be the biggest source of gaps are around the commercial areas of Columbia.  Walking or biking to the Mall, Dobbin Center or the shopping centers that have the big box stores in East Columbia require walkers or bikers to travel a road system that never planned for this mode of access.  Most of us would not feel safe using the roads around these locations.  When I bike I stay off most of the roads in Columbia because of the unsafe conditions for bikers.  I regularly bike in Allview Estates because of the lack of traffic on those roads.

Last week I attended a Connecting Columbia meeting that highlighted the interplay between the Columbia Association and Howard County Government .  Many of the connections in the pathway system might involve improvement to Howard County roads.  The Howard County Department of Public Works has painted bike lanes on Stevens Forest Road in a pilot of a greater use of these lanes on more of our roads.  Below is a picture of the lanes from one bloggers post. 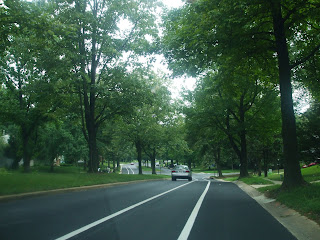 It is a good start but as the pictures below that I have previously posted from other communities show it is a very modest beginning. A link to the presentation 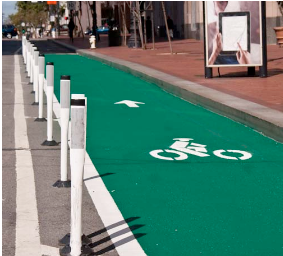 Posted by duanestclair at 6:19 AM

Ironically, the bike paths actually make it easy to get anywhere in Stevens Forest without using the road. If you're going to the village center, you only have to go on the road after the elementary school.

What we Oakland Mills-ers need more are speed bumps and crosswalks on Stevens Forest and Farewell.