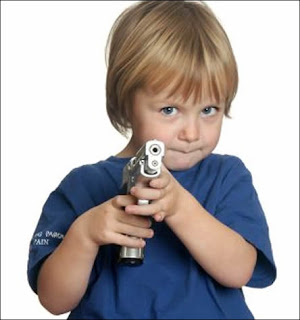 In the last week we have seen two incidents with guns that leave many of us wondering again if our country will ever have sane gun legislation.  It is one area of progressive policy on which we seem to be moving backward.  Since the passage of the Brady legislation the NRA and their supporters seem to have controlled the legislative agenda for Congress and most state legislatures. It shouldn't be news to anyone but the US has a terrible record on killing by handguns.  According to the CDC in 2003, there were 30,136 firearm-related deaths in the United States; 16,907 (56%) suicides, 11,920 (40%) homicides (including 347 deaths due to legal intervention/war), and 962 (3%) undetermined/unintentional firearm deaths. The overall firearm-related death rate among U.S. children younger than 15 years of age is nearly 12 times higher than among children in 25 other industrialized countries combined.  The United States has the highest rate of youth homicides and suicides among the 26 wealthiest nations.  We launched a "war on terror" when 3,000 of our citizens were killed in one incidence on 9/11 but are afraid to address the cause of the death of 10 times as many of our citizens EVERY year.

The first incident occurred in Baltimore City where a pre-school child brought a gun to school at Northwood Elementary.  I happen to be familiar with this school as a program for grandparents that I developed in Baltimore had a family support group at this school.  While we started to do the group for grandparents raising their grandchildren we were asked to have the grandparents mentor some of the single mothers of the children attending the school.  The school had pre-schoolers from all over northeast Baltimore and from some of the most troubled neighborhoods.  These were young children who were exposed to crime and dangerous drug troubled areas.  Many of these children had been exposed to things to which no young child should ever be exposed.

The second incident was the tragic killing of two women at St. Peters Episcopal Church here in our own county.  While we may not know the full story of the incident it now appears that a homeless man who had frequented the food pantry at the church was upset about not being able to come into the church any longer.  It is not hard to imagine that he may have some mental issues that were a factor in the incident.  We have a system of gun laws in this country that apparently give persons with severe mental issues access to guns and especially handguns.

Now I know at this point my liberal bias on the gun issue is apparent as someone who has never understood the love affair that many people have with guns.  You might be surprised to learn that I spent my teenage years as a hunter.  Legitimate hunting is far removed from the desire to own a handgun.  In fact I don't remember ever seeing a hunter with whom I hunted ever carrying a handgun (or an assault rifle for that matter.)  But the extremism of the NRA has unfortunately taken the position that any restriction on firearm ownership is a slippery slope to total gun confiscation.  Even more ridiculous is their second amendment argument that was written in the 1780's for militias is relevant for gun ownership in the 21st century.

When the severely mentally ill and pre-school children have access to handguns we have insane gun policies in this country.


Posted by duanestclair at 4:07 AM

You make the assumption that it was the system that allowed these guns to get into their hands. While I'm not a 2nd Amendment zealot, I sometimes find it completely unbearable to hear statements such as yours. Somehow the system of gun laws negates anyone's responsibility for their own action or inaction. Maryland has some of the most strict guns laws in the country yet still has one of the worst gun crime records in the country. The problem with restrictive gun laws is that they don't have any effect on people who obtain guns illegally.

Without strict national gun laws we will always have guns passing from states with loose gun sale laws to other states like Maryland. Not only have we created this problem in the US but we have armed the drug gangs in Mexico.