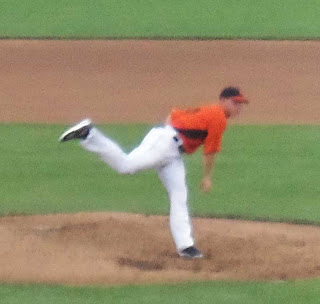 The only thing that has been good about the losing seasons of the Orioles is that they have had high draft choices that give us some hope for the future.  With Adam Jones being locked into a long term contract and Matt Wieters showing the promise of a first round draftee and future talents like Manny Machado playing well in Bowie the Orioles look like they have a promising future with these potential stars. 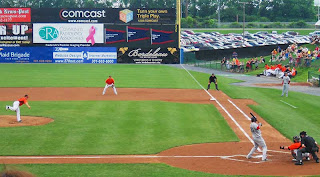 Last night I traveled out to Frederick to see 19 year old Dylan Bundy pitch his first game for the Frederick Keys. Over 9,000 were in attendance at the park and the hyped appearance of Bundy brought out an overflow crowd.  After dominating at Salisbury with the Shorebirds by only giving up 5 hits in his eight appearances and earning a 0.00 ERA with 40 strikeouts the expectations are sky high for Bundy.  His start tonight showed that this step up won't be as easy.  The first batter he faced hit a single and his ERA won't be the same after a Salem Red Sox player hit a two run homer off him.  His fastball clocked in the 92-94 mph range and his change up was in the low 70's.  It did keep many batters off stride but his frequent change up had batters beginning to look for it and a number of pitches were hit hard.  Fortunately for Bundy his Keys teammates scored three runs for him in the bottom of the fourth inning to regain the lead and provide him with the opportunity to get the win by pitching the fifth inning and not giving up the lead.  The Keys bullpen only gave up one more run to give Bundy the win.


It will be interesting to see his progression in the minor leagues this year and see how quickly he can move up to the next level in Bowie. Baltimore might be a year or two away but at 19 he has some time on is side.
Posted by duanestclair at 7:18 AM