A little background into the thought behind Columbia 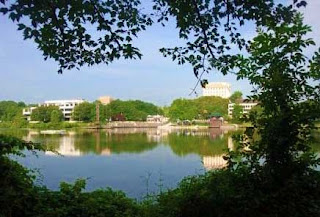 Columbia will always have a place in understanding what goes into a planned community.  As we finally approach the initial goal of 100,000 residents (about 37 years longer than originally thought) it is worth looking back at how the planners of the town approached their task.  I recently spent some time at the Columbia Archives looking through some of the files from those initial meetings.  I came across a description of the process in the summary notes of an unidentified author.  It is clear that this person was involved with the planning efforts around health care for the planned town but they also talked about some of the general issues that the planning groups faced.  It is interesting to note that Jim Rouse was never mentioned by name in the summary although it is apparent that he is being mentioned by other names in the summary. The following is the first part of the persons notes with my comments in parenthesize.

"The central group of consultants comprised various disciplines chosen to represent the gamut of those concerned in the life of a city, with particular stress on its interpersonal and cultural life. The physical aspects were represented by the skills incorporated in the developing company - people with architectural, engineering, financing, and city planning experience.... It included a political scientist and a city manager, there was an educational consultant and a social sub-group that met separately on higher education, a library planner, a communications expert, a transportation consultant, a lawyer who doubled as a representative of housewives (not sure how a lawyer is a good representative for a housewife but this was the 1960's), economists, one specializing in economic structure and another in housing and housing market analysis. The religious organization of the new community was discussed in a separate Interdenominational group."


"The first task in approaching the planning problem was to get over the feeling of awe at the size of it. It was estimated that it would take ten years to build the city (try 45 years!), if it were not to completely tie up all the construction facilities available in the Baltimore-Washington area. One day the discussion got onto the question of power supply, and the group found itself discussing the feasibility of having a nuclear plant for the production of electricity (obviously pre- Three Mile Island). The rate of building was proposed as 3,000 houses per year. The city we were contemplating twice that of Hagerstown, Maryland (population in 2010 was 40,000 with median income of $35,000). The very size of the venture was sobering."

" The staff had done a good deal of geographic work. The best stands of forest - and there are some magnificent individual trees as well as forests - had been plotted, and the areas providing views to the community had been exploited or preserved for common use and had been mapped (about 40% of Columbia is green space). The streams had been studied as to their usual and unusual flow patterns so that areas safe from flooding were known. The function of the streams in providing barriers within the area had been looked into and their possible function in supplying artificial lakes for recreation (Lake Kittaquandi, Wilde Lake and Elkhorn). Their steep banks in some areas precluded building economically on them and made them obvious candidates for relatively uncultivated, natural areas not to "be lightly interfered with."

"Once the size of the venture had been grasped the question which hovered over all other came to the fore and remained there.  This was primarily a political-ethical issue.  It can be stated quite simply: "How much ought one to plan the life of another, regardless of the bonafide good intention of the planner?"  It was recognized that every time a decision was made, it would affect the life of someone who would one day live in Columbia and would restrict his freedom to some extent, even though the freedom he wished to exercise might be a violation of someone else's freedom.  It was the old problem of when the restriction of freedom becomes tyranny and when freedom merges into license (think architectural guidelines). The question haunted all discussion so much that it had to be made a joke of--when the issue came up we called the entrepreneur (i.e Jim Rouse) the "Baron of Columbia."  He as concerned as everyone else that the "Garden for People" not become a prison for people and that freedom to grow not become growing row on row in strictly channelized patterns, ruefully had to accept the responsibility for the fact, but depended upon the consultants and his own sensitive consciences to maintain the greatest freedom for the future inhabitants while protecting the facilities for the good and free life as well."

P.S.
Howard County Parks and Rec is sponsoring a couple of events this week:

1) Free Saturday, First Time Opportunity! Learn about the Ellicott in Ellicott City! Good for those 8yrs+/May5/1:30, 2, 2:30, 3 & 3:30pm/ Thomas Isaac Log Cabin, Ellicott City (log cabin hours are 1-4pm). Who was this progressive family of Friends and what did they stand for? Family and friends will enjoy Virginia Schurman’s inspiring portrayal of Martha Ellicott Tyson, chronicler of the early history of then Ellicott’s Mills. Info: Cathy Eshmont ceshmont@howardcountymd.gov.

2) A flashlight journey in Meadowbrook Park this Friday night!  All ages can hit the trails on an Owl Prowl with our naturalist, in search of owls, bats, foxes, frogs, and other friends that come out to play at night. Friday, May 4th, 8-9 PM, Meadowbrook Park Hawksview Pavilion, $7 individual or $20 family. Register at this link.

At 3 p.m., Transition Howard County will have a free screening of “In Transition 2.0” at Miller Library, 9421 Frederick Rd., Ellicott City. This new movie captures inspiring stories of initiatives around the world where people respond to climate change and peak oil with creative solutions and engaged optimism. RSVPs required
Posted by duanestclair at 4:04 AM