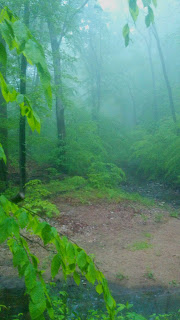 I have posted a few times that the feature that will always keep me in Columbia is the bike paths.  This past Friday was one of those days that makes you appreciate the beauty of the paths.  The rain the night before has created a fog on the path that parallels Dobbin Road, one of my favorite runs.  The lushness of the greenery from the trees and fog created a scene that reminded me of the rainforest that I have visited. 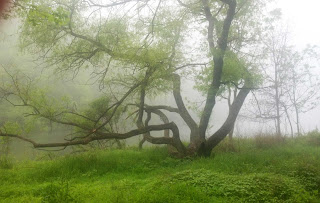 As I blogged about last week we can thank Jim Rouse for this feature of our town. From the notes of one of the planners of Columbia with my additions in parentheses  :

" The staff had done a good deal of geographic work. The best stands of forest - and there are some magnificent individual trees as well as forests - had been plotted, and the areas providing views to the community had been exploited or preserved for common use and had been mapped (about 40% of Columbia is green space). The streams had been studied as to their usual and unusual flow patterns so that areas safe from flooding were known. The function of the streams in providing barriers within the area had been looked into and their possible function in supplying artificial lakes for recreation (Lake Kittaquandi, Wilde Lake and Elkhorn). Their steep banks in some areas precluded building economically on them and made them obvious candidates for relatively uncultivated, natural areas not to "be lightly interfered with." 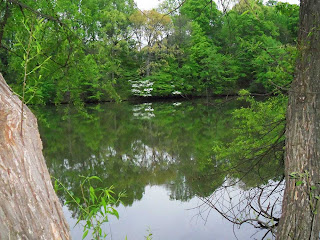 Posted by duanestclair at 6:49 AM

Beautiful pictures along one of Columbia's greatest assets - its pathways. Just a heads-up, CA is hosting a public meeting on the Preliminary Recommendations for the Connecting Columbia project. This is your opportunity to shape the recommendations to improve connectivity for pedestrians and cyclists in Columbia before they are finalized. This meeting will take place on May 23rd at The Other Barn (5851 Robert Oliver Place Columbia, MD 21045) from 7:00-9:00pm. To register for the event, please visit http://connecting-columbia-preliminary-recommendations.eventbrite.com/ is appreciated but not required. Hope to see you there!