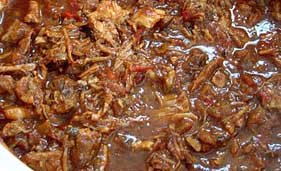 OK so I over-hyped the chili in the title of this blog but it is a favorite in our house.  With the cold weather this week and maybe our first snow of the season I always start to think of making chili.  Somehow warm weather is not the time for chili.  So as I drain the outside water faucets and pull up my dead tomato plants (did anyone get many tomatoes this year??) I plan to make my first batch of chili of the season.

Like everything else in our family the different tastes and food choices have begun to make food like chili more complicated.  Sometimes we end up with "add your own ingredients" and "make it as spicy as you want." I leave out the meat for my vegan kids and don't put to much spice into it for my wife.  Those get added by other members of the family after they put their portions in their bowls.

Ingredients including the secret ingredient that makes it great:
For the meat I like the pulled pork from Kolby's Smokehouse in the shopping strip off Johns Hopkins Road
Tomato base of San Marzano tomatoes found in cans in most grocery stores.  I buy the big can at Costco.
Sauted sliced portobello mushrooms
Finely chopped red peppers
Finely chopped large sweet onion
One can of beef broth
One cup of Don Pepino ground tomatoes or pizza sauce
Chili beans
Half cup of green salsa
1/2 cup red wine (more if you like a stronger wine taste) or grape juice for non drinkers
Secret ingredient----Sazon Goya Coriander and Annatto.  This is found in the Mexican aisle at Shoppers or Weis.  Without this it isn't the same chili.  Found about this seasoning from a student intern that stayed with us from Puerto Rico.


You can see I didn't give many quantities with the ingredients. Chili is one of those dishes that you make by taste.  Chop the onion, red peppers and portobello mushrooms and saute them in a pan with some butter. Then add the pulled pork and add the Sazon seasoning to taste. The box I buy comes with packets of seasoning.  I usually use 2 packets but again this is to your taste.  You can add more if you like later.

In a blender or food processor blend tomatoes till it is liquid.  Add the cup Don Pepino ground tomato sauce (found at Sam's Club) or pizza sauce to thicken the liquid.   Pour into a large pot with the wine, beef broth, sauteed vegetables, chili beans, green salsa and pulled pork.  Cook on a medium setting until it comes to a slow boil then reduce heat to a low setting and cook until the liquid is less watery and thicker.  Depending on the amount of liquid you used it can be from 45 minutes to 75 minutes.  Taste again and add a little more Sazon seasoning if the seasoning taste is not distinct enough. I know this recipe takes quite a bit of shopping (and cooking) to get all the ingredients that I mentioned and but you can substitute some similar ingredients to the ones I mentioned.

I like some good crusty bread with the chili.  Is that snow I see?
Posted by duanestclair at 4:40 AM

Email ThisBlogThis!Share to TwitterShare to FacebookShare to Pinterest
Labels: food

I'm glad I stumbled on your recipe during lunch today Duane. I had a party this past weekend at my house and I made some pulled pork in the crock pot. I was unsure how many people would eat it so I went with a huge piece of pork. Needless to say I have a good sized container of pulled pork left over. I'm going to stop by Harris Teeter on the way home tonight and pick up the missing ingredients and make this. I'll let you know how it goes. Thanks a lot!!

Look forward to hearing your take on the chili

Very solid recipe Duane! I made it during my lunch break today. I had a quarter bottle of red wine left over from my party the other night too so that came in handy here. I kicked it up to hot level with some jalapenos mixed in with the green chili.


I agree with your decision to not put any measurements on here. Once you have the ingredients in hand, it all sorta comes together and you can tweek it based on what your likes and dislikes.

Thanks a ton! I can't wait to eat it for dinner tonight.

Glad it worked out well. You must have a long lunch break as it takes me a couple of hours putting the ingredients together when I make it. I think chili is one of those foods that even taste better the next day.

I just bought all of the ingredients and left them on the counter last night in the order they go in. Then today I just diced the pepper, onion, and mushrooms in my dicer and blended the tomatoes in the food processor. Then I just dumped it in the stock pot that was already on the counter, stirred it up and I was ready to go. Where I telework, I was able to check back on it in a half an hour, stir it, and then let it ride out for another 15 minutes before cutting the heat. It worked out nice.