What do World Population Shifts Mean for the Future? 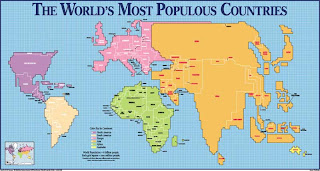 The Sun had a chart on Sunday that compared where the world population lived in 1950 as compared to 2010. During that time the world's population doubled but dramatically changed where the world's population lived. The dramatic shifts were in the percentage increases in the population in Africa and Asia.  In 1950 Africa had 230 million people and in 2010 they had 1 billion.  Asia in 1950 had 1.4 billion and in 2010 they had 4.2 billion.  Europe had the smallest increase in this time frame from 547 million to 738 million. North America doubled in population but South America passed it in total population.

The other population change during this period was with the movement of people from the country to cities. Again this was most pronounced in Africa and Asia.  In 1950 the largest cities in the world were New York, Tokyo and London.  In 2010 the largest cities were Tokyo, New Delhi and Sao Paulo.  New York is now 6th. Seven of the largest cities are now in Asia. Since the industrial growth generally occurs in cities and the increase in pollution is generally associated with industrial growth how will the world control global warming?  Will it be a losing battle?

One factor to watch in regards to future population growth  is how advancements in the education of women throughout the world impacts population growth.  It is widely know that one impact of women being educated is that they choose to have smaller families. One factor for this difference is that the more education a woman has the later she is likely to marry.  Another is that the frequency of the use of birth control being directly related to educational levels of women.  This even holds true in the United States with more women going to college and beyond and the trend for marrying at a later age. Average family size in the United States has shrunk from 4.6 members a hundred years ago to 2.4 members today.
Posted by duanestclair at 4:12 AM