And then there was one----Steve Jobs RIP 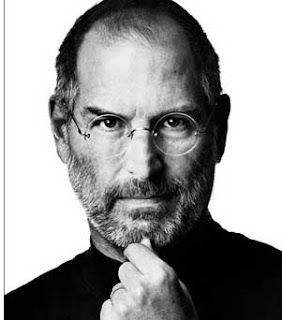 When I think of people I would like to have for a dinner conversation my list always included people with vision.  The list was Walt Disney, Jim Rouse, Steve Jobs and Bill Gates.  And now the only one still alive for that conversation is Gates.

The greatness of Steve Jobs was more than just his vision and creativity.  He developed one of the most valuable brands in the world.  Branding can be a powerful tool in marketing any product or service.  Apple was cool. Microsoft was not.  Was there any chance that an Apple devotee would switch to Microsoft?  I have never heard of one. Using an Apple product meant you were smarter than Microsoft users who just follow the crowd. Jobs left us the new revolution in computing in the Apple Cloud.  Five years from now we will all have terminals instead of computers and our applications and computing power will all be offline in some warehouse in Silicon Valley.

So today as I use my mouse, instead of a keyboard, to move around the screen on my laptop, listen to podcasts on my MP3 player, use my smart phone to track my morning run, take pictures and videos, I will say a thank you to Steve. Hear Steve's philosophy of life.

P.S. 2
Why not attend a blog party hosted by HoCo Blogs.  Stanford Grill next Monday.  Good food and great conversation.
Posted by duanestclair at 8:40 AM