Lost and Found: The Secrets of Archimedes 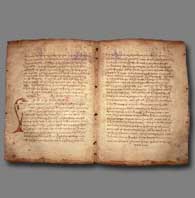 I have blogged on the Walters Art Museum in Baltimore before and want to mention about an exhibit they have now until the end of the year.  This is what there website says about the exhibit:

LOST for centuries. FOUND by the Walters Art Museum. Discover how an international team of experts resurrected the hidden manuscript of the ancient world's greatest thinker, Archimedes of Syracuse. Exhibition runs Oct.16-Jan.1.
In Jerusalem in 1229 AD the greatest works of the Greek mathematician Archimedes were erased and overwritten with a prayer book by a priest called Johannes Myronas. In the year 2000 a project was begun by a team of experts at the Walters Art Museum to read these erased texts. By the time they had finished, the team that worked on the book had recovered Archimedes' secrets, rewritten the history of mathematics and discovered entirely new texts from the ancient world. This exhibition will tell that famous story. It will recount the history of the book, detail the patient conservation, explain the cutting-edge imaging and highlight the discoveries of the dogged and determined scholars who finally read what had been obliterated.
The exhibition Lost and Found: The Secrets of Archimedes will conclude with two galleries that ask "What will we discover next?" In six interactive learning stations, conservation staff will present artworks from the Walters' collection to illustrate the very real questions that start the process of learning and discovery through research. For example, you will be invited to consider why a Kentucky Long rifle is associated with a pastoral 19th-century drawing by Rosa Bonheur, to explore what Ethiopian painting and manuscript illustration have to do with colorful minerals on display, and to ponder how silver preservation could be revolutionized by recent advances in nanotechnology.
Posted by duanestclair at 8:28 AM

So good topic really i like any post talking about Ancient Greece but i want to say thing to u Ancient Greece not that only ... you can see in Ancient Greece The fourth century and more , you shall search in Google and Wikipedia about that .... thanks a gain ,,,