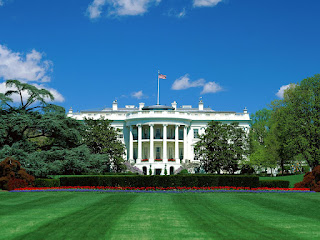 Columbia is 25 miles "as the crow flies" from the White House in DC but you would never know it by how Columbia and Maryland are ignored by the presidential candidates.  Not being a swing state in the electoral college system means we are taken for granted.  You have to be "purple" to matter.  Our 6 million residents are certainly not alone in this situation.  California's 37 million residents and New York's 20 million residents must wonder why they are ignored while the 3 million residents of Iowa get multiple visits from the candidates.  Of course we all realize that this situation is because we still have an archaic Electoral College system.  It gets even more ridiculous when you realize that in the swing states the candidates are fighting over 3-5 percent of the voters in those states.
Maryland will also never hope to have a presidential convention because of not being a swing state.  Trivia question.  What city has hosted the second most presidential conventions? Baltimore.  The last in 1912 in the Fifth Regiment Armory.
After the craziness of the 2000 election where a few hundred votes in Florida and one vote on the Supreme Court determined the election by the Electoral College and with the candidate gaining the most popular votes losing you would have thought we would come up with a better system for the 21st Century.  After all until the early 20th Century we still had senators chosen by state legislatures instead of by popular vote.  My dream outcome for this year is that Romney wins the popular vote and Obama wins the Electoral College because until each party has this happen nothing will change.

Posted by duanestclair at 5:00 AM

I'm not really sure where you are going with this topic. In the history of Columbia, we have only had one sitting president visit (and that was to see Willie Nelson). The purpose and nature of political conventions has also changed quite a bit since 1912. For instance, presidential candidates did not attend conventions until the mid 20th century. Moreover, with television coverage, the conventions have departed from doing the actual democratic process and are more just week long celebrations. A brokered convention now exists more in the later years of "the West Wing" than in reality. Another point to consider is that conventions have been held recently in newer arenas. Until Baltimore get a new arena built, chances are slim, even for consideration. Lastly, I'm not sure political conventions are the kind of thing most Maryland-ers desire. Maybe we focus on a summer olympics or a world cup.

Presidential elections don't have to be this way.

The National Popular Vote bill would guarantee the Presidency to the candidate who receives the most popular votes in all 50 states (and DC).

Every vote, everywhere, would be politically relevant and equal in presidential elections. No more distorting and divisive red and blue state maps. There would no longer be a handful of 'battleground' states where voters and policies are more important than those of the voters in more than 3/4ths of the states that now are just 'spectators' and ignored after the conventions.

The bill uses the power given to each state by the Founding Fathers in the Constitution to change how they award their electoral votes for President. Historically, virtually all of the major changes in the method of electing the President, including ending the requirement that only men who owned substantial property could vote and 48 current state-by-state winner-take-all laws, have come about by state legislative action.

The bill has passed 31 state legislative chambers in 21 states. The bill has been enacted by 9 jurisdictions (including Maryland) possessing 132 electoral votes - 49% of the 270 necessary to go into effect.