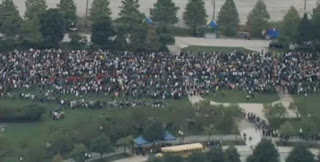 We all saw the pictures like the one above in Chicago of young people lining up on August 15th to sign up for the temporary differed action for childhood arrivals of illegal immigrants.  There are an estimated 800,000 to 1.2 million youth impacted by President Obama's policy action. It is also estimated that 25% of the illegal aliens in the United States are youth that were brought to this Country by their parents. Young persons between 15 and 30 years of age are eligible for the amnesty if they can show that they have been in the country for 5 years, are attending school and have no criminal record.  The criminal record part is a little complicated where it is difficult to determine what would a DUI disqualifies a person but a speeding ticket doesn't.  Shoplifting may not disqualify a person but breaking and entering would.  These are just some of the details that have to be worked out in the implementation of the President's executive order.
I talked with Hector Garcia, Executive Director of the Howard County Foreign born and ImmigrantReferral Network (FIRN), recently about youth in Howard County impacted by this Executive Order.  FIRN is only agency in Howard County that is accredited by the Board of Immigration and Appeals to assist immigrants in the citizenship process.  For many immigrants FIRN is a more credible path to gain citizenship than going to a private immigration attorney.  FIRN has held information sessions for youth and families and has assisted some youth in the application process.  For youth applying for the amnesty their are some important questions for them to consider.  The first is that it is only a 2 year temporary amnesty and with the election this year and the possibility of a new Presidential administration in 2 years their is uncertainty about what will happen then to youth who have identified themselves as being in the Country illegally.   The second question is how youth applying for this amnesty could place their parents at risk for deportation by identifying their household and parents.  This may not be as great a concern in Howard County or Maryland as in states such as Arizona and Texas will their aggressive anti immigration laws where this could pose a more serious risk to parents of youth applying for amnesty.
This is all happening at a time when Maryland will have a parallel issue on our November ballot of granting children of illegal immigrants in state tuition for attending one of the University of Maryland's campuses.  I had the information on my blog a few days ago but here it is again:

Establishes that individuals, including undocumented immigrants, are eligible to pay in-state tuition rates at community colleges in Maryland, provided the student meets certain conditions relating to attendance and graduation from a Maryland high school, filing of income taxes, intent to apply for permanent residency, and registration with the selective service system (if required); makes such students eligible to pay in-state tuition rates at a four-year public college or university if the student has first completed 60 credit hours or graduated from a community college in Maryland; provides that students qualifying for in-state tuition rates by this method will not be counted as in-state students for purposes of counting undergraduate enrollment; and extends the time in which honorably discharged veterans may qualify for in-state tuition rates."

Failure to develop a coherent immigration policy that addresses the illegal immigrant population in the United States is an ongoing issue that has been stymied but anti immigrant rhetoric.  We don't have the ability to identify and deport the estimated 8 million illegal immigrants in our Country and have to develop a means to provide citizenship to those immigrants who have been productive workers and tax payers.

P.S.3
So you think you can sing? Howard County Teen Idol auditions 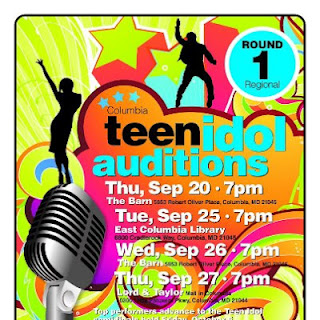 Posted by duanestclair at 6:03 AM