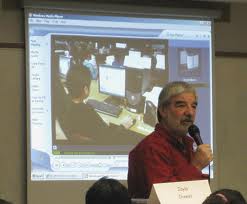 Two weeks ago we lost a member of our community who made a contribution with the Lazarus Foundation that touched the lives of many persons in Howard County and beyond.  Don Bard passed away after a two year battle with cancer.  During this time Don stayed actively involved in directing the Foundation he set up to insure that people who couldn't afford new computers could receive the refurbished ones from the Lazarus Foundation.
In the early 1990's Don was a member of the Howard County Computer Users Group that met at the Bain Center in Columbia.  From involvement in that group came the idea to refurbish computers for distribution in our community.  Don took the lead in the effort and after retiring from the National Endowment for the Arts worked to set up the Foundation.  Lazarus has been located in many locations over the years from space in Gateway to Atholton High School to their current location in 2005 at the Applied Research Laboratory on Route 108.
Many of the volunteers with Lazarus came from the Elder Hostel sessions on computer refurbishing that Don conducted over the years.  Those session had up to 36 participants and often had waiting lists of 80-90 persons. The picture above is of one of those sessions.
Computers have gone to many different groups but the largest has always been the Bright Minds Foundation for Howard County Schools.  Other groups included grandparents raising grandchildren, foster children and veterans.
The family has identified the following areas for donations in Don's name:

P.S.
If you know of a person in our community who I should highlight email me about that person.
Posted by duanestclair at 4:10 AM

I have gone through your blog. The information you have given about Memorial gifts that is really informative.Likers will definitely like it. I am really thankful to you. You will get some important information through my site. So Please visit my site http://www.thememoriesplace.com

RIP Mr. Bard. A great teacher and a great individual.

Mr. Bard was a mentor and always like a father figure to me. Easily the greatest boss I ever had! It has been a pleasure working with him and I am honored to have met him in my lifetime. I never got a chance to say thank you......Rest In Peace Mr. Bard!

It has been many years since Don has left this physical earth, but I wanted to let anyone that has sought solace in his passing, that he has been one of the most significant teachers in my life, and though I only was his student for a brief period, his impact helped to define my entire life

Fuck cancer, thanks for everything Don <3