Today in History : 150 years after the Emancipation Proclamation 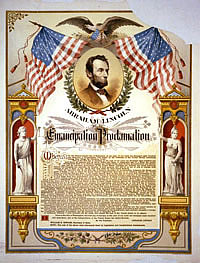 In my Tuesday blog on the battle of Antietam I mentioned that the battle gave Lincoln the rationale to issue the Emancipation Proclamation 150 years ago today.  Lincoln had been waiting for a Union victory and even though Antietam was fairly much a draw it did push Lee's Confederate Army back across the Potomac into Virginia.  The Civil War now took on the moral cause of the abolition of slavery in the rebelling Confederate states in addition to saving the United States.  However in Lincoln's own words to Horace Greenly in August of 1862:

In talking about this week's events someone posed the question to me of "I wonder how long slavery would have lasted if the South had won the Civil War?"  Interesting question that led me to do a little research.  I came across a summary of the book "If the South had Won the Civil War?"  The general conclusion was that slavery would had greatly diminished by the end of the 19th Century because of the steam and electric engines that replaced the need for slaves to produce the agricultural crops of the South.  The Industrial Revolution would have eliminated most field slave jobs and only some domestic household slaves would have probably lingered into the 20th Century.  The cost of feeding and clothing slaves was very expensive which was shown by Thomas Jefferson and other well known slave holders dying in debt.  Economic reasons would have eliminated slavery faster than moral reasons.

P.S.
Robinson Nature Center One-Year Anniversary Open House Event
All ages / Free
Celebrate Robinson Nature Center’s first birthday through this special open house event. Come out and experience live animal presentations, nature crafts and shows in our planetarium. Walk the trails, explore the exhibits and play in the Discovery Room. Children must be accompanied by an adult at all times. No registration necessary. Click here for activity and parking information.
Robinson Nature Center | Noon-5 PM
Posted by duanestclair at 4:45 AM