I have blogged before on an unsuccessful attempt to grill a pizza.  Somehow my attempts to duplicate the taste of wood-fired pizza at home have been a mixed result.  I have long used a pizza brick in the oven to get the crispy crust of a brick oven pizza but still attempt to get a wood fired pizza.  I saw the book above at the HoCo Library and thought I would try the methods described in the book.  I learned that to do a pizza on a Weber grill the coals should be on one side of the grill and the pizza on the other side.  Indirect heat.
Do you know that you can make a pizza crust in a George Forman grill?  Or a cast iron skillet?  I tried with the George Forman grill and after a few poor results I found out that the dough has to be very thin and the grill has to be coated well with an oil (olive oil mixed with ground garlic worked well.)  While this will never be the way I make pizza it was a quick way to make pizza in a hurry.  After taking the finished cooked crust out of the grill you top the pizza with any topping you want and then add your cheese and put it under the broiler to melt the cheese. 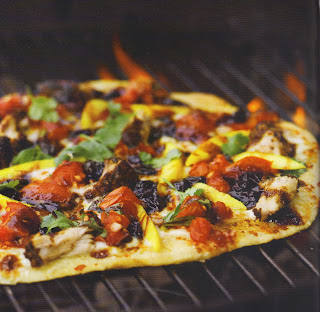 I tried the recipe for the pizza above (on a grill) that included a plum chutney (1/2 cup prune juice, 2 tablespoons brown sugar, 1/4 cup raisins) that you dollop around the pizza, 1 teaspoon cornstarch and 1/4 teaspoon chilli flakes), smoked pork, mango and chopped tomatoes.  I used some feta cheese. I added some chopped fresh basil after coming out of the oven.  My grilled pizza below didn't look as good as the one from the book above. 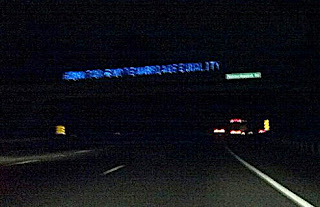 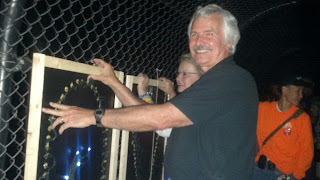 Last night Marylanders for Marriage Equality held a lighted sign above Route 95 to encourage people to vote for Question 6 for marriage equality in Maryland in November.

Posted by duanestclair at 6:05 AM