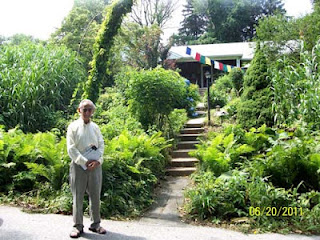 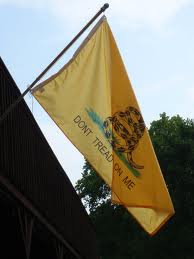 I have been doing some door to door canvassing for Equality Maryland this past week in Allview.  This community has always been a favorite place for me to run and bike. Bounded by the Patuxent River and watershed running along the eastern side and Beaver Creek, which runs along the southern border, U.S. 29 to the west and Broken Land Parkway to the north. Allview has always seemed to be the anti-Columbia place by its diversity of housing.  But this past week I have also had a chance to meet many of the residents of this community and its diversity makes this a fascinating place.  The two pictures above show this diversity.  From Edwin Gould pictured above whom I blogged about last year to the home with the "don't tread on me" flag you can see this diversity of residents.  Liberal to conservative.  I met a number of Applied Physics Lab employees and military personnel.  I wasn't surprised by the APL employees (and retirees) because of its closeness to APL and the fact that Allview was developed in the 19950's and 1960's, by local developer Henry Witt, around the time that APL moved to Columbia from Silver Spring.  What did surprise me with the military personnel was that they didn't all work a Ft. Meade.  I met one that worked at Andrews, Bolling and even one that worked at Ft. Belvoir.  Seems like the word about Howard County schools is well known and shared among the military at all these bases.  Their commute is worth it to have their children in Howard County schools. 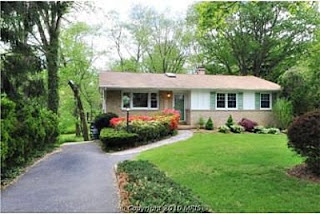 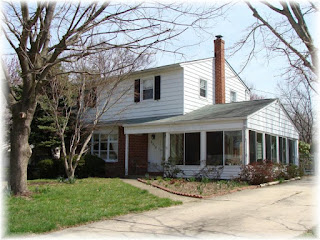 You can't help but notice the diversity of housing styles in Allview.  It is not like much of Columbia with builders offering only 4 or 5 styles.  Add to that is that many of the homes have been renovated and modernized that adds to the diversity.  You can find a small early 1960 style rancher next to a large modernized 5000 sq. ft home.  I don't know how you do comp values for homes in Allview as they are so diverse.
The Allview Area Civic Association holds a Fourth of July parade and annual house tour.  The community does have its own community pool.

P.S.
I have to admit that I turned the channel to the Democratic Convention after the Orioles blew a 5 run lead in the 8th inning last night to the hated Yankees.  I figured I would read this morning of how the Orioles blew the game.  I should never give up on this Oriole team.  Was delighted to read and watch how they roared back in their half of the 8th inning.  Something about this team does inspire you.

P.S. 1
Video this Friday is how I feel being at the beach this week.
Posted by duanestclair at 4:05 PM