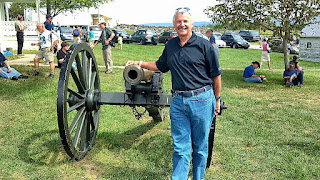 I mentioned last Friday that this past weekend was the celebration of the 150th anniversary of the Civil War battle of Antietam.  On Sunday I along with thousands of others from around the United States joined in this event.  Parking for the event, which was being covered by the national media, meant that you had a mile walk to get to the visitor's center at the park. 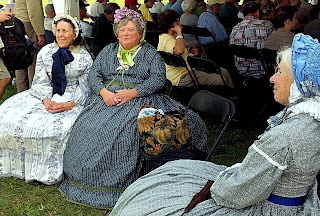 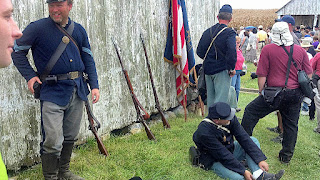 For those not familiar with the Antietam battle is was the deadliest day in American history for the number of killed soldiers.  While the exact count is unknown it is estimated that there was 23,000 causalities on that day September 17, 1862.  Below is the picture today of what the most famous site on the battlefield known as Bloody Lane looks like today. 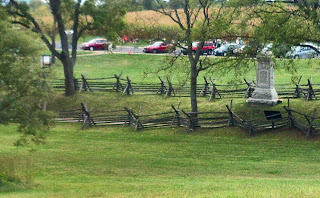 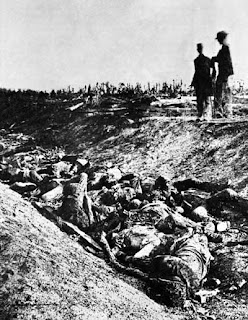 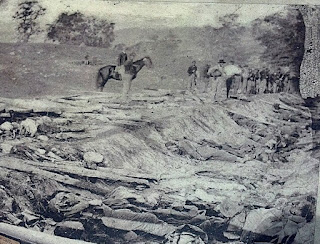 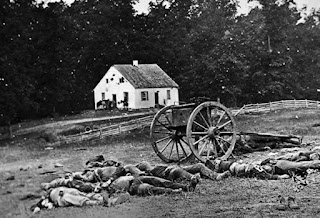 "Attacks and counterattacks swept across Miller's cornfield and fighting swirled around the Dunker Church. Union assaults against the Sunken Road eventually pierced the Confederate center, but the Federal advantage was not followed up. In the afternoon, Union Maj. Gen. Ambrose Burnside's corps entered the action, capturing a stone bridge over Antietam Creek and advancing against the Confederate right. At a crucial moment, Confederate Maj. Gen. A.P. Hill's division arrived from Harpers Ferry and launched a surprise counterattack, driving back Burnside and ending the battle. Although outnumbered two-to-one, Lee committed his entire force, while McClellan sent in less than three-quarters of his army, enabling Lee to fight the Federals to a standstill. During the night, both armies consolidated their lines. In spite of crippling casualties, Lee continued to skirmish with McClellan throughout September 18, while removing his battered army south of the Potomac River."

Even though the battle was close to a draw the battle provided President Lincoln with the opportunity to issue the Emancipation Proclamation 5 days later on Sept. 22, 1863.  This turned the Civil War into more than just a battle for preserving the Union and made the issue of slavery front and center.   Leaving the battlefield on Sunday you can't help but wonder about the level of brutality that we humans use to resolve our disputes.  Most of the killing that day was at close quarters and you saw the person you were killing.  Far different from the drone pilot sitting in Nevada killing enemy combatants in Iraq and Afghanistan.


P.S.
Very good You Tube video on the battle.

P.S. 1
From the Columbia Patch: 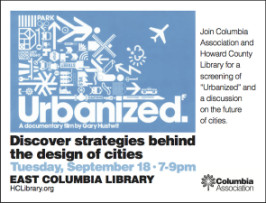 The Columbia Association in partnership with HoCo Library is sponsoring the film "Urbanized"  will be shown Tuesday, Sept. 18, from 7 to 9 p.m. at the East Columbia 50+ Center, located at the East Columbia library branch at 6600 Cradlerock Way, Columbia. The running time for “Urbanized” is 85 minutes. Following the screening, there will be a group discussion about the future of cities.
“The challenges of balancing housing, mobility, public space, civic engagement, economic development and environmental policy are fast becoming universal concerns,” reads the film’s website. “Yet much of the dialogue on these issues is disconnected from the public domain.”
Seating for the screening is limited — registration is desired, though not required. Register online at bit.ly/urbanizedfilm.

P.S. 2
For football fans at the Central Library tonight:

Baltimore Ravens: The Inside Scoop From Monique Jones

Learn the insider's scoop on the NFL today from Monique Jones, Baltimore Sun's sports content editor and former Patriot's reporter for the Boston Globe, who has covered most professional sports.


P.S.3
Living in DC in the 1970's this event was always a rite of Spring.  Glad to see it has finally happened.

Posted by duanestclair at 4:49 AM