I can tell the age of everyone reading the title to today's blog.  If when you read the title you found yourself completing it with "in your Chevrolet" you are probably over 50 years of age.  Diana Shore had Chevrolet as a sponsor for her show and somehow the words will always be tied together. Of course now our mode of seeing the USA is probably a plane which isn't the same as driving through a state.
Someone recently sent me a link to a site which allowed you to create a map of the states in the United States which you have visited.  This is how my map looks. 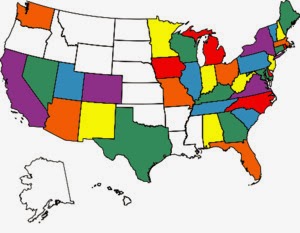 Many retired people set as a bucket list goal to visit all fifty states.  You can see that I have fourteen left to go.  Alaska, Oregon and Hawaii seem the most interesting on this list.  The rest of the remaining states seem to congregate in the middle of our Country.  I am sure that each has interesting features that make a visit worthwhile but for some reason have never attracted me.  Some of the states I have visited I only passed through on my way to someplace else (Kentucky, Tennessee) some I only touched the edge of the state (Iowa, Minnesota) and some I have only been to by transferring planes at an airport (Utah, Missouri) .  In fact I had to go back and revise the map for those airport transfers.
In looking at the map I realized that my kids moving to other states has been the reason I visited some states.  I have had kids move to Massachusetts, Georgia, Texas, North Carolina and California.  Just your typical Columbia raised family.  The many of the friends of our kids have scattered all over the United States.
I remember a time when I was young when my interest was seeing the world and my grandmother kept telling me that no other country in the world was as varied and interesting at the United States.  She had visited all of the lower 48 states and could never understand why Europe and other parts of the world held such interest for me.  Some of this was generational and some was that I was interested in other cultures and languages.  Of course a case could be made that we have a variety of cultures and languages in the United States too.  Ever try to understand someone with a heavy Southern accent?
This map has made me think about what there is to see in the states that are white on my map.  Some states out West have some national parks that could be a draw and Louisiana has New Orleans but what would draw me to Oklahoma or Kansas?  Maybe just to say I had been there.  The remaining states for the most part seem boring to me.

P.S.
My most ambitious bucket list item is to bike across the United States.  I don't know if I will ever do it but to truly experience an area a bike is so much better than in a plane or even a car.  To get a taste of how true this is bike through some areas of the Eastern Shore and see how different they are on a bike than in a car.

P.S.1
Video of the week is Pharrell William's Happy
Posted by duanestclair at 6:03 AM

Nice blog entry! My map has every state but Alaska - partly, a function of growing up as an "Army brat" and moving across the country every three years. As far as what can draw you to the states you've missed, start with these:
Louisiana - New Orleans, obviously, but I think you'd enjoy Cajun country - Lafayette and south - more. Beautiful; and I say that having lived there for 9 years and going to school at what's now UL-Lafayette
South Dakota - Mt. Rushmore and the Black Hills
Wyoming - Yellowstone, the Grand Tetons and Jackson Hole. Absolutely gorgeous!
Montana - the other side of Yellowstone, the Missouri headwaters, and the grasslands.
Idaho - the Snake River, Sun Valley
Oklahoma - OKC's a big city with a lot to do. Just DON'T go during tornado season (Spring)
Arkansas - the Ozark mountains, in the northwest part of the state, extending into Mizzou so you can really count the state.
Mississippi - the Gulf Coast, the Natchez Trace, or the Memphis suburbs
That leaves you Kansas, Nebraska and North Dakota to deal with. :-)

Thanks for your suggestions. Yellowstone is definitely in my plans for a visit. Many of the other parks out West are definitely in the plans too. Kansas, Nebraska and North Dakota will probably fall into the "drive through states" category!