Today marks the final day to sign up for the coverage from the Affordable Health Care Program.  Like the Federal site anyone who attempts to log onto the Maryland site to sign up today but is unable to complete the process will probably be given until April 15th to complete the process.  The Governor has finally decided that the Maryland site will be scrapped after this year's sign up period and the software developed by Deloitte for Connecticut will be used this November for Maryland's next year's sign ups.   Maryland's attempt to be a model for signing up its citizens for the program turned out to be an embarrassment for the State.  The Washington Post did a report back in January which outlined the problems with the site development.  Just as the old saying that "too many cooks spoils the broth" it appears that there was inadequate project management for the effort without clear lines of authority to make decisions.  One hundred seventy million dollars seems to have been wasted in the effort.  Not surprisingly there has been considerable finger pointing since the unsuccessful October roll out.
For those of us that have been advocates for health care reform that finally decouples health care coverage from the employer based system the failures in Maryland and initially with the Federal site have been frustrating.  This failure has unfortunately given political ammunition to opponents of any health care reform. I am still watching what happens with the healthcare developments being tried in Vermont with its single payer Green Mountain Health Care program.
So what it the good news about Maryland health care?  Maryland has the lowest cost in the nation for delivering a baby.  Compared with the average across all reporting states, Maryland hospitals charged $3,000-$4,500 less for vaginal births, and $7,500-$10,500 less for cesarean births.  In fact as the chart below shows Maryland has the slowest rise in hospital costs of any state in the nation. 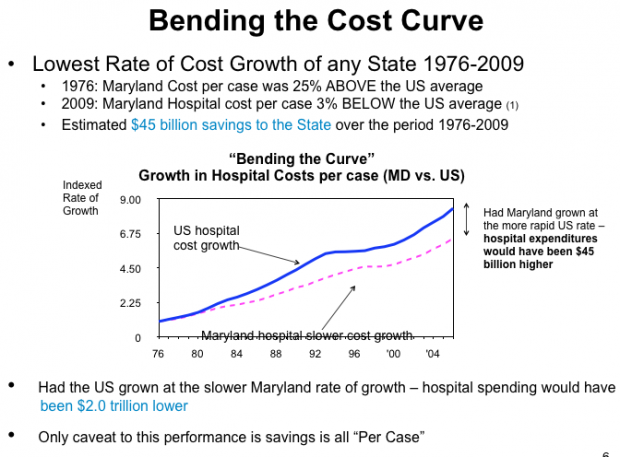 As the Washington Post reported in January, Maryland has received permission from the Federal Government to experiment to  "cap hospital spending and set prices — and, if all goes as planned, cut $330 million in federal spending. The new plan, which has been under negotiation for more than a year, could leave Maryland looking more like Germany and Switzerland, which aggressively regulate prices, than its neighboring states. And it could serve as a model - or cautionary tale - for other states looking to follow in its footsteps."
“You can put Maryland in the company of Massachusetts and perhaps Vermont as the three states furthest out in trying to invent a new future for cost accountability in health care spending,” added Harvard University’s John McDonough. “Success creates a model that other states will want to look at emulating. And failure means it’s an option more likely to be crossed off the list.”
It seems with attempts to improve health care for Marylanders sometimes you swing and miss and sometimes you hit a home run.

Posted by duanestclair at 7:03 AM