Concussions: Is Lacrosse next?

First it was boxing that brought to light the effects of blows to the head causing significant brain injury.  Mohammad Ali has unfortunately brought to everyone's attention what this damage can do.  Most parents don't have to face the question of a son taking up boxing.  I don't remember reading about boxing leagues in Columbia. But with the recent death of a football player at the Naval Academy the safety of that sport has also made parents think about whether they would let their sons play this sport. The National Football League has also been struggling with the concussion issue and has made rule changes to try an limit the amount of concussions players suffer.  The issue of the long term impact concussions has been raised by the number of former players who suffer from Alzheimers and other brain impairments as they age.  What is even more concerning is that even only suffering a few concussions can cause significant brain injury. So it is not surprising that recent surveys of mothers has shown that 10-20% of them won't let their sons play football.  I bet the rate would be even higher in Columbia. 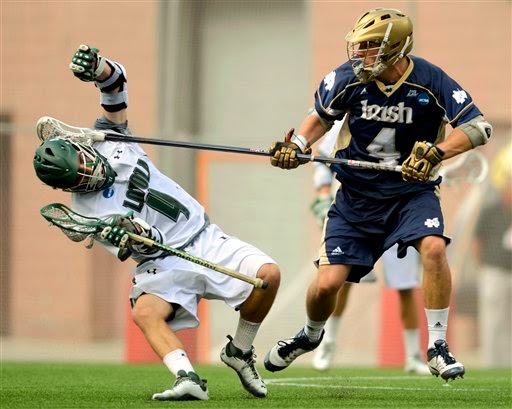 Probably more relevant for Maryland is the impact on sports like lacrosse and soccer.  These two sports have cult like followings in our State and County and yet they also have some troubling aspects with it comes to concussions.  A report by the Institute of Medicine stated,

Not having a child who played lacrosse I was surprised at the violent nature of the sport when I watched a match last Fall on a field at Rockburn Park.  While the blows to the head like in the picture above maybe unusual I did see the lacrosse stick used in ways that caused me to wonder about the safety of the sport.  Combine that with the cross checking of the body and it made me wonder how much safer this sport was than football.  I certainly know the benefits of having children, especially girls, involved in athletics and team completion but today parents have to rightly balance those benefits with the potential for significant possibility of long term injury. Just another thing for parents to worry about.

Posted by duanestclair at 8:06 AM