Think back 40 to 50 years ago when the village center concept was developed.  The only choices for grocery shopping were in the village centers.  Hardware store? Only in a village center.  Today our choices for groceries have greatly expanded to Wegman's, Costco, BJ's and soon Whole Foods.  My own grocery shopping is very diversified and I only use the local Giant to pick up a few items a couple times a week instead of for my weekly shopping.  Home Depot and Lowes are now the places for hardware. 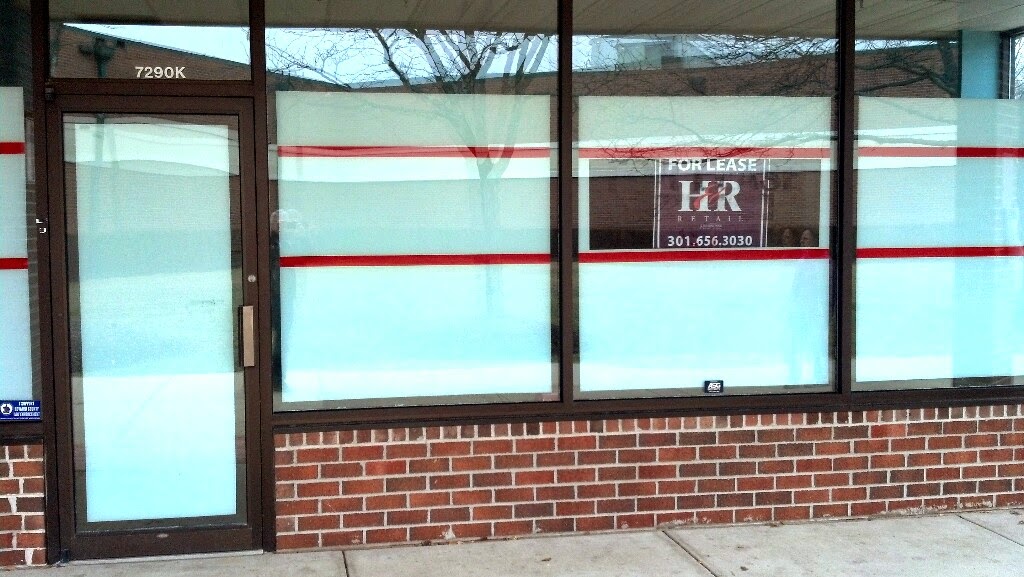 Walk around many of our older village centers and you see leasing signs like the one pictured above in the Owen Brown Village Center.  This space has been unoccupied for a few years and it doesn't seem to be a viable location for a business needing this sized space.  Even the movement to have the Long Reach Village Center labeled  "distressed" shows how the village center concept is being reworked.
Tomorrow night, Tuesday March 25th from 7-9 p.m., the second public meeting of the “Columbia Market Analysis and Economic Development Services” study will be held at Slayton House (10400 Cross Fox Lane, Columbia, MD, 21044). The consultants will discuss some of the initial market findings they've uncovered for the village centers and GE-Dobbin Road-Snowden River Parkway corridors. As explained in a press release from CA:
"This study is a collaborative effort between Columbia Association (CA), Howard County Economic Development Authority and Howard County Department of Planning and Zoning. Thestudy will evaluate current and projected demand for development in Columbia’s village centers, as well as an interrelated analysis of the Dobbin Road/Snowden River Parkway/former General Electric manufacturing area."
"The study began in late October 2013 and is anticipated to be completed by April 30, 2014. This study is part of a continued focus on Columbia’s village centers. In 2009, the Howard County Council adopted new regulations to promote revitalization of Columbia’s village centers. During the development of the Howard County General PlanHoward, CA worked with the county to include a recommendation in the plan for a village center market study."

Some of the changes impacting our village centers are also showing up with the enclosed malls.  These malls were the future of retailing when they were first developed in the 1950's and 1960's.   They evolved as retail hubs moving from the smaller unenclosed strip malls.  The development of the interstate highways during this period of time led to the development of suburban communities and enclosed malls far from the downtown retail stores. This retailing trend has now run its course and is shown by the fact that no new enclosed malls have been built in the US since 2006.  This cycle was shown very well in a segment on the CBS Sunday Morning show this past week.

Our own Columbia Mall seems to be weathering the changing retail scene better than other malls in our area such as the Laurel Mall and the Owings Mills Mall.   But even at our Mall the picture above shows how some of the new realities are impacting the Mall.

Opening up the Mall may only be the first step in the evolving of our Mall similar to what is happening to the previously mentioned malls.

P.S.
It is hard to underestimate the impact of online shopping on retail shopping.  Why go to a local store when the internet has opened up the world for merchandise?  It is becoming common that you go to a retail store to see a product and then use your smartphone to see what the price is online and then order it from the online merchant.  Retail merchants only become merchandise showrooms.

hocoblogs@@@
Posted by duanestclair at 8:51 AM

paledo serI feel that the Columbia Mall is still a great place to shop. I feel comfortable there.

Part of what attracted us to Columbia just a few years ago was the village centers. They make all areas of the town walkable for basic needs and some extras. We have no interest in living in a non-walkable suburb where we are forced to drive across town to a sea of big box stores for everything. The village centers, with grocers, must stay, along with a more walkable downtown area. Perhaps some changes to what retail is in the village centers is needed to keep with the times, but it would sad to lose them. Perhaps more restaurant options and smaller spaces with promotion for local retail/service entities would be a nice addition.