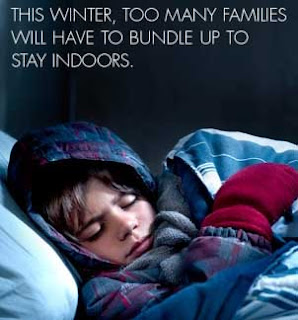 Last Sunday a did a blog on the reduced Energy Assistance for low income persons this winter. I contacted Bita Dayhoff at the Howard County Community Action Council to see what the reduced dollars look like this year in Howard County.  Bita indicated that the funds this year are only 60% of what they were last year.  Last year they served about 4800 families.  Because of the reduced dollars this year's grants will have to be reduced.  Let's hope for a mild winter.

A number of years ago I saw first hand who received these grants when I took applications for homebound senior citizens in Howard County.  I remember taking many applications for seniors living in the trailer parks along Route 1.  Many of these trailer parks no longer exist.  It was hard to imagine how these seniors made it on such small monthly incomes.  I heard stories of having to make choices between rent, food, medicine and heat.  One very elderly lady indicated that she spent days in bed when it was really cold to conserve on her heat. Another elderly gentleman in western Howard County told me that in the winter he lived on the possums that he shot around his home during the summer.  He had a freezer full of frozen possum that he showed me.  I can't say they looked very appetizing but he assured me that they tasted "pretty good." I took his word for it.

I sometimes think of these folks when, for me, keeping warm in the winter is just turning the dial on a thermostat.

P.S.
Good news story
OMAHA, Neb. (AP) - The young father stood in line at the Kmart layaway counter, wearing dirty clothes and worn-out boots. With him were three small children.He asked to pay something on his bill because he knew he wouldn't be able to afford it all before Christmas. Then a mysterious woman stepped up to the counter."She told him, 'No, I'm paying for it,'" recalled Edna Deppe, assistant manager at the store in Indianapolis. "He just stood there and looked at her and then looked at me and asked if it was a joke. I told him it wasn't, and that she was going to pay for him. And he just busted out in tears."

At Kmart stores across the country, Santa seems to be getting some help: Anonymous donors are paying off strangers' layaway accounts, buying the Christmas gifts other families couldn't afford, especially toys and children's clothes set aside by impoverished parents.

Before she left the store Tuesday evening, the Indianapolis woman in her mid-40s had paid the layaway orders for as many as 50 people. On the way out, she handed out $50 bills and paid for two carts of toys for a woman in line at the cash register.
"She was doing it in the memory of her husband who had just died, and she said she wasn't going to be able to spend it and wanted to make people happy with it," Deppe said. The woman did not identify herself and only asked people to "remember Ben," an apparent reference to her husband.
Posted by duanestclair at 4:49 AM