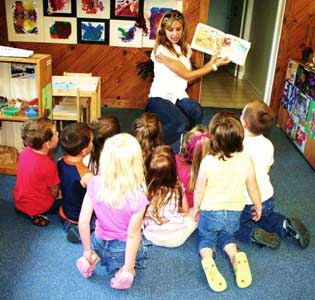 With the move in the 1990's from the welfare program called Aid to Families with Dependent Children (AFDC)   to a program that promoted job training and job placement for mothers with dependent children the change came with the understanding that child care subsidies were required to make "workfare" work.  The thought was that using public dollars to subsidize child care was cheaper and more effective than paying single mothers to stay at home watching their children and always being dependent on welfare.  Ronald Reagan demonized the "welfare mom" as what was wrong with public assistance.  Creating dependency was seen as expensive and wrong programmatically.

In an article in the New York Times it is apparent that the difficult budget times for the feds and many states now means that the day care subsidies that permitted mothers to be employed are rapidly disappearing.  According to the Times,

"The subsidy, a mix of federal and state funds that reimburses child care providers on behalf of families, is critical to the lives of poor women. But it has been eaten away over the years by inflation and growing need and recently by state budget cuts, leaving parents struggling to find other arrangements to stay employed. 'States have dropped their investment in child care substantially,' said Linda Saterfield, vice chairwoman of the National Association of State Child Care Administrators, who oversees child care for the state of Illinois. 'We’re being expected to do more with less.' Her state has toughened eligibility for the subsidies and raised co-payments from families to cover the growing demand."

In Maryland over 8,000 eligible persons are on the waiting list for the day care voucher. “We’ve seen quite a steep increase in demand,” said Elizabeth Kelley, director of Maryland’s Office of Child Care. Families have used unlicensed child care providers or quitting work and moving in with family while waiting for the subsidy. Making the problem worse is the fact that because of low rates of reimbursement many child care centers are not taking the child care vouchers.  Only 3 states now reimburse at the federally recommended levels as opposed to 22 that were at those levels 10 years ago.

Here in Howard County in a report called "Making Ends Meet" released recently by the Association of Community Services, funded by the Horizon Foundation, the lack of affordable child care was a major barrier to self sufficiency for low income workers.  To be self sufficient in Howard County with two preschool children a family would have to make almost $72,000.  The Report stated,

"The Federal Poverty Level has little relevance to the reality of trying to make ends meet in Howard County and sets work supports program eligibility levels so low that they often provide a disincentive to earn higher wages.  All household types experience loss of total income as they earn more and exceed eligibility for benefits. In the most extreme example, a household with one adult and two preschoolers is surviving at minimum wage ($7.25) working full time, but as soon as the adult earns $1 more per hour, the downward trajectory rapidly takes them below self-sufficiency at about $10 per hour and does not reach ‚“breakeven‚” again until earnings are $35/hour, or $72,000 per year."

"For the purposes of this study, a working poor individual is defined as any individual earning between $10,830 and $31,517 -- $10,830 represents the Federal Poverty Level for one adult in 2009,3 and $31,517 is the self-sufficiency annual income for one adult in Howard County in 2009 as determined by 2010 Howard County Self-Sufficiency Indicators Report1. A single individual must earn more than $31,517 a year in Howard County to be considered self sufficient  and no longer poor. The American Community Survey 3-year Estimates 2007-2009 indicate that there were 11,108 persons living below the Federal Poverty Level in Howard County in 2009, during that period 4 percent of the County’s population."

"Child care remains the largest non-tax expense in Howard County family budgets and, as has been shown in the “cliffs” diagrams, has the ability to throw families into the financial abyss. Affordable, high quality child care for low and middle income families, particularly in the earliest years of a child’s life, has the potential to 1) relieve financial stress in working poor families, 2) benefit employers whose parent workers can be more productive and, most importantly, 3) begin to build the human capital of a new generation."

"Squeezed by rising living costs, a record number of Americans - nearly 1 in 2 - have fallen into poverty or are scraping by on earnings that classify them as low income. The latest census data depict a middle class that's shrinking as unemployment stays high and the government's safety net frays. The new numbers follow years of stagnating wages for the middle class that have hurt millions of workers and families.

"Safety net programs such as food stamps and tax credits kept poverty from rising even higher in 2010, but for many low-income families with work-related and medical expenses, they are considered too 'rich' to qualify," said Sheldon Danziger, a University of Michigan public policy professor who specializes in poverty. "The reality is that prospects for the poor and the near poor are dismal," he said. "If Congress and the states make further cuts, we can expect the number of poor and low-income families to rise for the next several years."

"Congressional Republicans and Democrats are sparring over legislation that would renew a Social Security payroll tax cut, part of a year-end political showdown over economic priorities that could also trim unemployment benefits, freeze federal pay and reduce entitlement spending. Robert Rector, a senior research fellow at the conservative Heritage Foundation, questioned whether some people classified as poor or low-income actually suffer material hardship. He said that while safety-net programs have helped many Americans, they have gone too far, citing poor people who live in decent-size homes, drive cars and own wide-screen TVs."There's no doubt the recession has thrown a lot of people out of work and incomes have fallen," Rector said. "As we come out of recession, it will be important that these programs promote self-sufficiency rather than dependence and encourage people to look for work."

"Mayors in 29 cities say more than 1 in 4 people needing emergency food assistance did not receive it. Many middle-class Americans are dropping below the low-income threshold - roughly $45,000 for a family of four - because of pay cuts, a forced reduction of work hours or a spouse losing a job. Housing and child-care costs are consuming up to half of a family's income.States in the South and West had the highest shares of low-income families, including Arizona, New Mexico and South Carolina, which have scaled back or eliminated aid programs for the needy. By raw numbers, such families were most numerous in California and Texas, each with more than 1 million."
Posted by duanestclair at 4:30 AM

This post sheds a light on an aspect of poverty that isn't really apparent to many. The system is broken when people reach a level of income but can't take a raise or advance in any meaningful way without losing childcare support. Essentially, it punishes people for working hard and trying to advance in their job. It's nice to see this issue addressed.

The reason childcare is so expensive, which this blogger correctly identifies as a major barrier to self-sufficiency for low income workers, is because the excessive government regulations surrounding it. Think about what you would need to do, all the regulatory hoops you would need to jump through, in order to start a day care business in your home. Licenses, inspections, certifications; the list goes on and on.

And I question how much safer all this regulatory burden makes kids. Are parents so stupid as to leave their kids with some crackhead?