While the problem with carbon dioxide has captured most of the climate change attention one part of our climate problem has not received as much attention.  That is our trash problem.  Our climate is impacted in a variety of ways because of our production and disposal of all our packaging and other used materials that end up in our landfills.  While Howard County has been a leader in the recycling movement with a successful recycling program which is now moving to include food scraps, New York City is struggling to come up with a solution to its substantial waste problem.  How long can they just "bury" this problem? 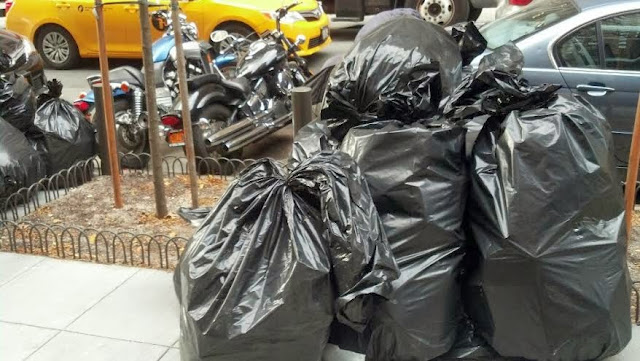 You haven't seen trash piles like this until you walk down a New York City street right before the trash pick up.  This past week I took the picture above on a walk down one street.  The night before walking through an area of NY with a number of restaurants the piles were huge and smelly.  Can't imagine what a treat this is for NY rats.  It seems that many areas of the City have trash pickups at night to cut down on the traffic congestion that day time trash pick up would cause.
A recent article from the Capital New York website shows clearly how poorly New York has done in developing a recycling program:
"San Francisco recycles 77 percent of its waste. Seattle and Toronto recycle about half. New York just 15%.  Meaning, every day, New Yorkers sends 22,000 tons of solid waste to landfills."
San Francisco is working to be the first "zero waste" city.
New York is hoping to have a new recycling center ready next year after many years of delays because of lawsuits.  This explanation is from the website Mobilizing the Region:
"Four different lawsuits have delayed construction of the 91st Street marine transfer station. A 2005 lawsuit unsuccessfully challenged the environmental review, and was rejected by an appellate court in 2008. While that appeal was in process, a second lawsuit was filed in 2006 claiming that construction impacted a nearby “public” park, Asphalt Green."

P.S.
Do you have a budding engineer in the family?  You might want to check out the Rube Goldberg competition that is sponsored by the Library.  Registration deadline is tomorrow, December 6th.

P.S. 1
Meeting tonight on the future of Columbia's Village Centers.
Posted by duanestclair at 5:34 AM