Stanford Grill: A cut above? 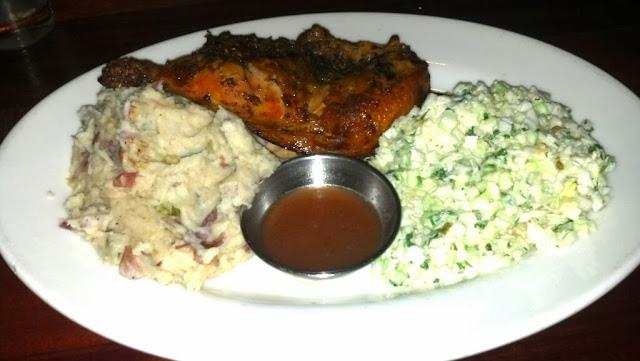 After having some friends rave about the Stanford Grill we decided to check it out last week.  The atmosphere is a step up from the average Columbia restaurant with a piano player at the entrance and an inviting gas fireplace. I saw the words "proper dress required" on their website and am never sure what that means.  No shorts and sandals?  I wore jeans and wasn't turned away at the door.

My friend had recommended the wood-fired rotisserie chicken which is pictured above.  This came with garlic mashed potatoes and I chose their cole slaw over the green beans.  I have had too many bad green beans in restaurants.  The best thing about the meal?  The cole slaw slaw was the best I have ever had!  Too bad the chicken was too dry.  Good thing they added the au jus to dip the chicken in. 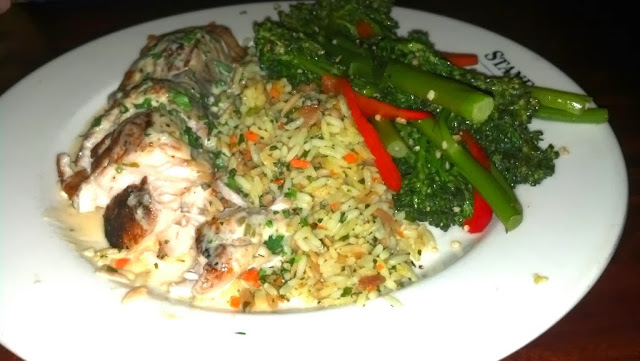 One dining partner had the Short Smoked atlantic Salmon with orzo rice and asparagus spears pictured above.  They said it was nothing special.
Another dining friend had the cloak and dagger sandwich which is kind of a version of a Cuban sandwich with thinly sliced prime rib, fresh cut black forest ham and sharp cheddar cheese with dill pickles and spicy
brown mustard on a toasted baguette.   They started eating it before I could get a picture.  They recommended the sandwich as being very good. Our last friend had the chicken pot pie pictured above and raved about it.  Seemed to have a good deal of chicken and veggies in it.
We all decided to split two desserts and both chose the Key Lime pie. 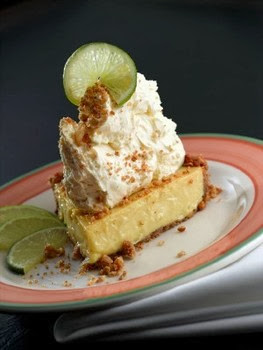 Nice ending dessert.  So we had "two thumbs up" and two "so-so" reviews.
P.S.
Lakeside Cafe moving.  I heard that the move was to be closer to its best customer-- Enterprise Community Partners which has moved to at 11000 Broken Land Pkwy.  Seems that Enterprise was the big user of the Cafe and when they moved from the American Cities building Lakeside decided to follow close to where their best customer had moved.

hocofood@@@
Posted by duanestclair at 7:56 AM