Back in the 1970's and early 1980's the energy crisis hit our country after the oil embargoes and the Three Mile Island incident.  Our President at the time Jimmy Carter has been mocked for his lecture to our citizens that we were wasting energy and needed to conserve. The solar energy industry was still in its infancy but much was being written about this source of energy as the way we could have a new source of environmentally safe cheap energy.  The free protons that hit the earth were the way to a better future.  It seemed as if this revolution was just around the corner.  I remember seeing new homes in Owen Brown being built with solar panels that used heated water.  These were the precursors to our current solar cells which generate electricity


During this time some forward thinking County employees in the Public Works Department wanted to prepare newly built County buildings for this coming solar reality.  Roofs of these buildings were built with a 30 angle facing South, the ideal orientation to collect the sun's rays.  I was involved in the planning for the Bain Center at this time and you can see this aspect on the roof of the building. 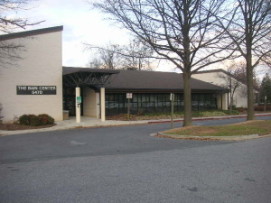 You can also see this with the Central Library

The plan was to add the panels once the cost became cost effective.  Unfortunately the time was not just around the corner but we still might see if happen in the not too distant future. The chart below shows that potential cost point around 2016.

The Bain Center has one additional feature that was supposed to use solar energy for cost savings.  The building was to have a "solar envelop" that would go around the entire exterior.  The cost of this was too expensive and the envelop was only built on the front of the building facing South.  Simply this was a glass front that heated the air between it and the glass windows of the building.  Hence the "envelop" concept.  This heated air was supposed to be blown into the building to provide some the the heat for the building.  In the Summer the vents in the envelop would release the heat back outside.  Unfortunately this technology never worked well and the system was never used. But you can still see it in the front of the building.
The County is still working to make County buildings more energy efficient with the passage in 2007 of the Green Building Initiative, Coun­cil Bill No. 47–2007, estab­lished green build­ing stan­dards for pub­lic and pri­vate build­ings in Howard County. Effec­tive July 1, 2008:

Posted by duanestclair at 4:13 AM