What the heck is Pickleball?

What's the fastest growing sport in America?  Try pickleball.  The sport with the funny name has caught fire in this Country, especially with the retired senior crowd.  Go to any senior community and you will find this game being played on underutilized tennis courts.  The sport has been brought back up north from those snowbirds who learned the game in Florida.  The epicenter of the pickleball world is definitely The Villages in Florida.  Having played there the past two years I can't begin to tell you how seriously pickleball is taken at this location.  Players line up at 8 am every morning and play throughout the day and evening.  They are now up to 180 courts.

The  game is played with a plastic whiffle type ball like the one shown above.

The paddle is larger than a ping pong paddle but smaller than a tennis racket.

The court for pickleball is smaller than a tennis court which is one reason that the sport has become popular with the mature crowd.  You can find many former tennis, racquetball and ping pong players playing the sport. 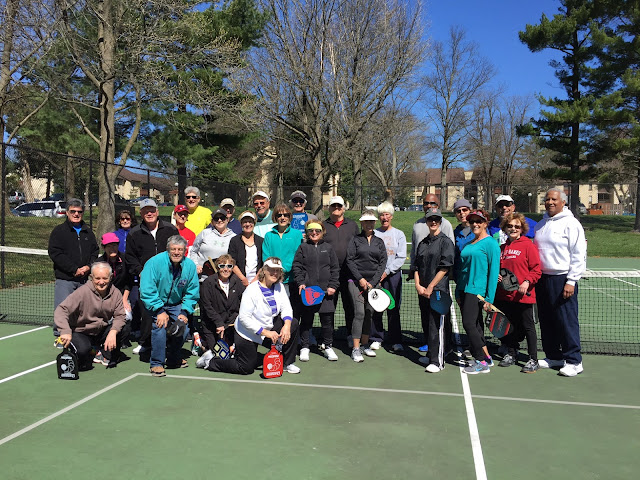 Here in Howard County you can find a large number of players, pictured above, at the tennis courts behind the Ice Rink in Oakland Mills Village Center most Tuesday and Saturday mornings depending on the weather.  This year we played throughout the Winter except when there was snow on the courts.
If you or anyone you know would like to try this game come out to the tennis courts behind the Ice Rink this Thursday May 18th at 10 am.  Rackets and balls provided with some instruction.

P.S.
The first pickleball courts in Howard County are almost ready for play at the Atholton Park in Allview. 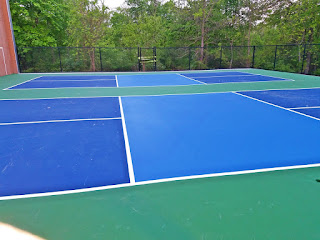 P.S. 1
Here is the link to a Howard County Recreation and Parks August pickleball tournament.

P.S. 2
Here is a link to watch an instructional video.

Posted by duanestclair at 8:35 AM