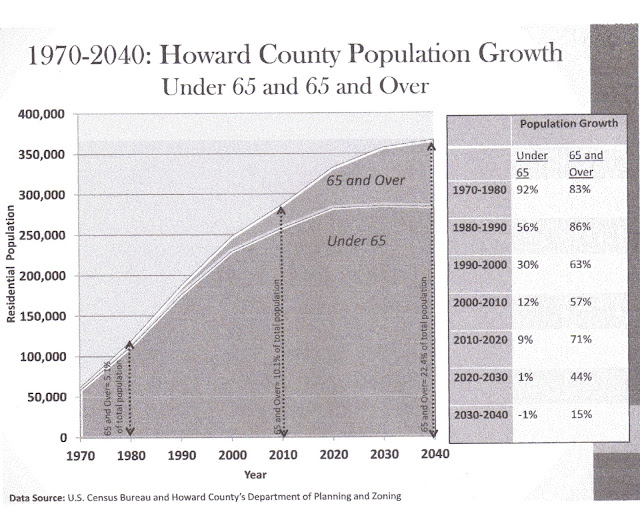 While we hear a great deal about the development of Town Center, the aging of our population from one of young families to a mature community gets less attention.   The present trend only gets more dramatic moving forward. The baby boomers who moved into our County in the 1970's and 1980's are now staying and creating a growing bulge in out aging population as show in the graph below. The graph below shows the bulge 5 years ago. 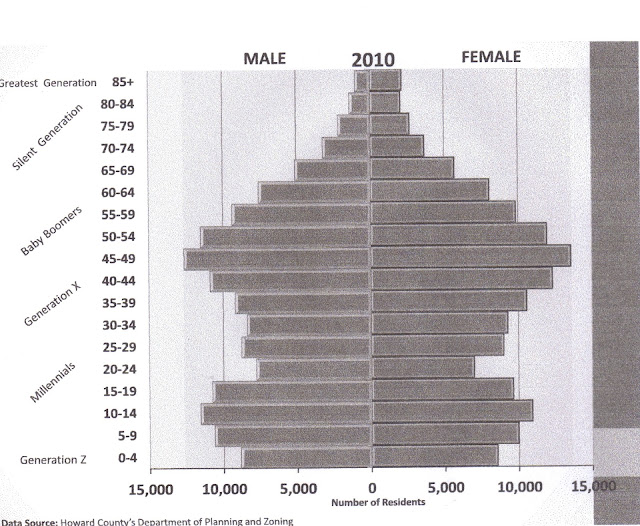 Over the next 20 years as the baby boomers move into their 70's and 80's this bulge will flatten out the pyramid from its current configuration as shown in the graph below. 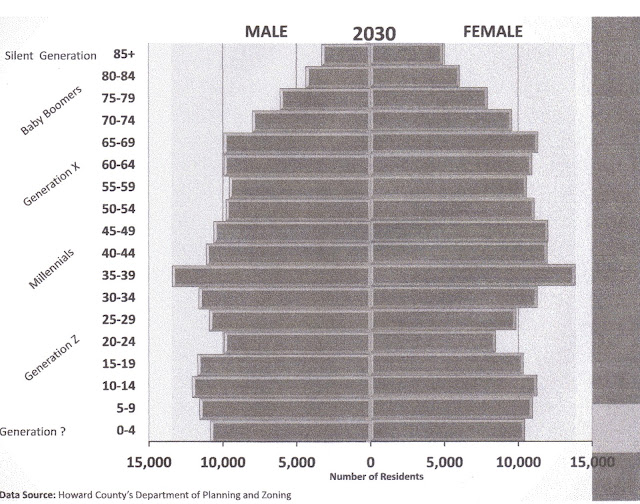 This demographic change will require an increased level of coordination and collaboration to address the needs of this population.  In the past the lead in addressing our older population was primarily focused on funding and programs developed by local government.  Often other components of our community were slower to recognize the impacts of the changing demographics.   We are now seeing a growth in development targeting this older population.   It seems like another 55+ housing project goes up every month.   Real estate agents are beginning to specialize in meeting the current downsizing of the County's baby boomers.  For the most part these baby boomers are not relocating out of our community on a permanent basis.  The "snowbird" population of Howard County is rapidly growing.  My snowbird senior pickleball compatriots are already beginning their annual migration.  The first of the year they will all be gone South.
We have long been known for our community's first rate schools, employment opportunities and high quality of life amenities.  The question is now can we translate that into being a nationally recognized community for a high quality of life for an aging population.  The challenges are different than what the community planners of the 1960's faced but no less important so that we continue to be seen as a desirable community moving forward.  Stay tuned. I will address more about this Master Plan in the future.

Posted by duanestclair at 7:57 AM

Thanks for posting that. I'll have to look deeper into those numbers when I get a chance. Some of them look simply unbelievable. The first questionable assertion is that HoCo's growth rate is going to slip from 16% from 2000-2020, down to 7% from 2020-2030 and then 3% from 2030-2040. I see no evidence for that, particularly given the continuing strong immigration trends. I recognize that any predictions for that time frame are nothing more than a SWAG (Scientific Wild ... Guess).

Also, given relatively flat population growth, the decline of the white population to be around 20% of HoCo in many age groups seems unbelievable. Yes, a lot of immigrants are moving here, particularly from Asia, and if the population of HoCo was projected to double you could knock the white percentage down quickly. But if you're predicting relatively slow growth, and the white population percentage dropping like that, you're pretty much predicting some type of "white flight" from HoCo, or all the whites dying off and not being replaced by other white people. And I frankly don't see that happening.

Interesting stuff to me, but that's why I'm working on the grad degree in data science. :-)