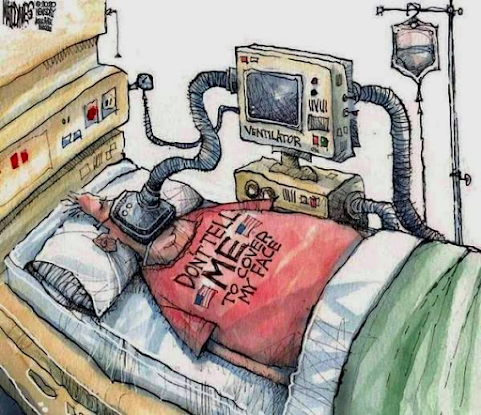 We all had trouble understanding how a cult figure like Jim Jones in 1978 could get his followers to drink poisoned Kool-Aid.  Little did we know that someday we would draw parallels to an American president.  Now we see our current cult figure, Donald Trump, and his Republican followers, resisting getting vaccinated or wear a mask that will end up killing some of his cult followers.  Jim Jones killed a couple hundred of his followers, far fewer than the hundreds of thousands of Americans who died because of how Trump mishandled the COVID virus.  Belonging to a cult means giving up your independent mind.  You could call it the "lazy-mind" syndrome.  Don't expect COVID anti-vaccination cult followers to change their minds.  They have an easier time accepting death.

Another similarity between Trump and Jim Jones is that when they felt attacked they sent their followers to kill the people that they saw as their enemies.

Land of the crazies.

Posted by duanestclair at 4:28 PM