It is always interesting when a local resident hits the national news.  Most recently this applies to former Ellicott City resident Edward Snowden. This NSA whistleblower/traitor (take your pick) is only the most recent in a long list of local residents hitting the news.  I guess being located near DC means that many of our residents have the potential to be in positions that could lead to making the national news.
Up until Snowden our most controversial local resident to gain national exposure was Linda Tripp.  Remember her?  She was the Columbia resident that befriended Monica Lewinsky in the Bill Clinton scandal back in the 1990's.  I had one sighting of Linda Tripp that I will always remember.  Eating breakfast at the Bagel Bin (I think it may have still been called the Bagel Shoppe back then) one Saturday morning with the Howard County Striders bagel runners, in walked a woman with a full length fur coat and sunglasses.  The weather didn't seem cold enough for a fur coat and it caught everyone's attention.  Then one of the runners leaned over the table and whispered "that's Linda Tripp."   Needless to say we weren't the only ones there who had recognized her.  You could tell she was nervous as she scanned the people around the Bagel Bin and hurriedly left the shop with her bagels.  She moved to Northern Virginia soon after.
In 2003 Columbia resident Jayson Blair was uncovered as having falsified articles he had written for the New York Times.  While not having the notoriety of the people mentioned previously, it is considered a major scandal in the newspaper world and has led to many newspapers developing policies that require more scrutiny by editors on high profile articles. 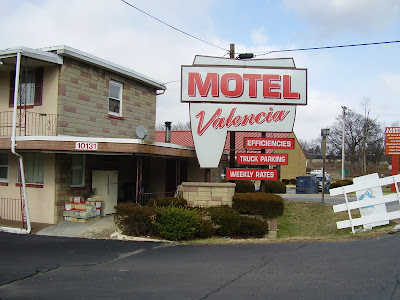 On an even more notorious vein we were all shocked to learn in 2001 that some of the 9/11 hijackers had stayed the Valencia Motel in North Laurel.  While not exactly local residents even their short stay in our County is worth noting.  I still think of this every time I go by the Route 1 motel.

P.S.
Guess we should take some pride in the fact that some famous one time Columbia residents like these make us proud to be from Columbia.
Terry Virts, astronaut
Elise Ray, Olympic gymnast
Edward Norton, actor
Randy Pausch, college professor and You Tube star


Posted by duanestclair at 4:44 AM