Can a "senior" village be created in Columbia? 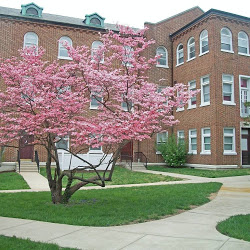 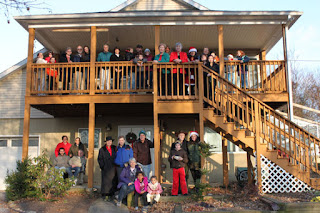 In working on this project I learned about the network of co-housing communities and visited one in Carroll County, pictured above, called Libertyvillage. This is an intergenerational community of 20 households currently with eventual plans for forty families.  The important aspect of co-housing is that families agree to live in a community that has mutual support and interaction as its core value.  This is what attracts the families to this community.  These communities develop in response to the feeling that we have lost the bonds that used to define past communities.
A couple of weeks ago I received an email from David Griesman at the Columbia Association about a meeting to be held in Columbia on November 8th to explore an idea that has some similarity to the concept discussed above but with a twist.  As the email described it:

"There are senior centers in Columbia, as well as housing developments specifically for older adults — but what about a village? ‘Villages’ — which are not neighborhoods or villages as we generally know them, but more like nonprofit groups — have been established in places such as in Beacon Hill in Boston and in Capitol Hill in Washington, D.C. And it is an idea that will be pondered for Columbia and Howard County at an informational meeting on Thursday, Nov. 8, from 10 a.m. to noon at Linden Hall in the Dorsey’s Search Village Center, located at 4765 Dorsey Hall Drive in Ellicott City. The discussion, titled “The ‘Village’: A New Concept in Aging,” is being hosted by Columbia Association’s (CA) Senior Advisory Committee.
The idea of a ‘village’ appeals to those who want to stay in their home as they grow older, be independent and self-sufficient as they age, and remain connected to their community and an active participant in their golden years. A decade ago, for example, the seniors of Beacon Hill came together and formed a ‘village,’ building a community of like-minded individuals that provided social connections, information, events and support services to help them grow old at home."

This  initial meeting is being hosted by the Columbia Association but the intent is to explore how this effort can be an independent effort to create a new entity to carry out this concept.  The meeting will have representatives from the Capitol Hill Village to talk about their experiences. The timing of this discussion is very timely as many of Columbia's villages are increasingly becoming populated with residents entering their senior years.   In some of my political canvassing the past couple of weeks in Wilde Lake I was surprised to see most of the households being in the 50-70 year old range.  These are households who moved to Columbia in the 1960's and 70's to raise their families and now are empty-nesters.  As Columbia becomes a very mature community going forward how it becomes a supportive community for seniors will become an increasingly important question.  The original planners of Columbia gave little thought to this reality as it was primarily being developed and marketed for young families.  This reality of a mature community presents some challenges and opportunities.  Now might be the right time to discuss how to meet both the challenges and opportunities.

Posted by duanestclair at 4:28 AM