Why is Howard County doing so much better with the COVID-19 virus? 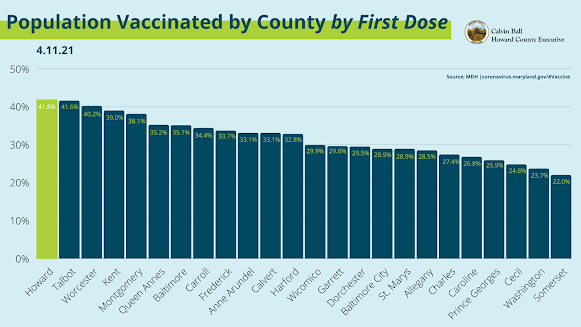 If you haven't been noticing, Howard County has one of the lowest (if not the lowest) positivity rates for the virus (one of the few counties under 5%) and one of the highest vaccination rates in Maryland (3rd highest rate and the only non-rural county scoring so high).  We are used to having Howard County recognized as one of the best places to live in America for so long maybe we have just become accustomed to being good at most community aspects.   Is the high vaccination rate the reason we have a low positivity rate?  Is that we have many white-collar workers who have been working from home? Is our highly educated population more willing to socially distance and wear masks? Is our liberal political population less influenced by the distorted messaging from the right-wing political world that discredits the harm of the virus?  Is our affluent population more health conscience and more likely to have access to good health care?  The answer probably involves a little of each of these factors.  Another reason to feel fortunate to live in a Rouse-designed community.

Posted by duanestclair at 10:09 AM

I think that the low positivity rate is because there's a large proportion of the population that can work from home and people who can't don't often live in county or live along route 1, which seems where most of the cases have been. As for the vaccine, it's probably a bit more jumbled. I think there's a decent part of the population who works in the healthcare industry and were vaccinated early.