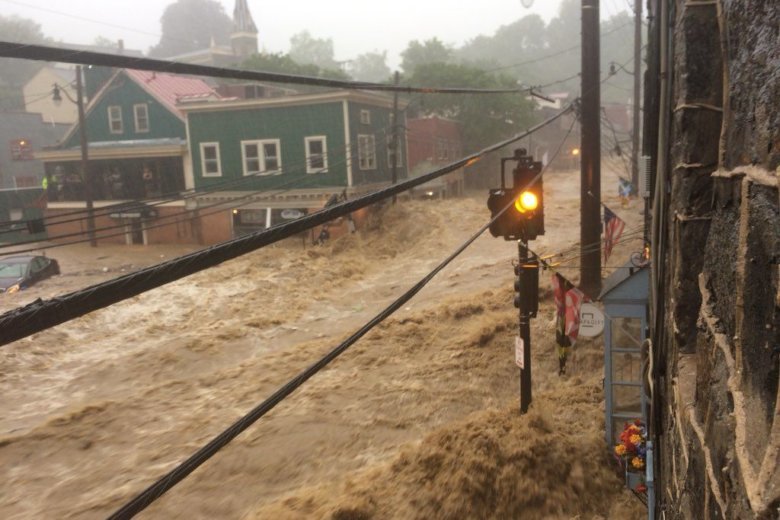 With two floods within two years that took lives in both cases, addressing the problem with flooding has caused the County to look at significant measures to insure that we won't see the same flooding in the future.  After the first flood it was assumed that we were looking at a rare event that could be managed with some basic water divergent measures.  The second flood caused a much more radical solution with the controversial component of tearing down some historical buildings.  While property damage is concerning the fact that there were lives lost in both floods was probably the precipitating reason a more radical approach was looked at this time.  After the two floods most of us would look at the weather forecast before heading down to Main Street.  Unlike the Patapsco River flooding which gives plenty of time to evacuate, flooding caused by the two tributaries that flow along Main Street can turn deadly in minutes.  Any possible threat of thunderstorms would cause most people to avoid the area and cancel reservations.
While the causes of the flooding remain controversial (over development and climate change)  for the County come up simply with a water diversion plan this time would have been negligent.   As much as historical preservation is important, the reality is that some of the buildings along Main Street are situated in places that can never be adequately protected from flooding by a water diversion plan. I would hope that the lesson of the two floods is that not endangering lives always trumps endangering buildings.  Main Street Ellicott City has survived other transitions (i.e. retailers moving from Main Street to Route 40 in the 60's and 70's) and there are possible opportunities in the new plan that have the potential to create a new vitality to Main Street.  It is a mistake to be so stuck in what has existed in the past that you miss new, better opportunities in the future.  Change is healthy, even for places like historical Main Street.

#hocoblogs
Posted by duanestclair at 2:59 PM

I agree with your comments and opinions on this. I can offer a few clarifications and details, based on my professional background.

I offered a question to Kittleman several months ago on a radio interview program shortly after the last flood event. My question, in essence, was how do we sustain and improve profitable Main Street businesses when the flood risk is so high and the flood insurance premiums are prohibitive (most lower Main street bizzes had NO flood insurance during and before these two flood events).

Kittleman addressed, generally and quickly, as follows: a) the approved regional storm water mitigation plans for the Patapsco/tiber/hudson creek drainage areas should lessen the storm water impacts in downtown (for floods caused by the Tiber and Hudson creeks, not the patapsco), to a degree that the Federal Emerg. Management Agency's(FEMA)flood impact/risk levels would be significantly reduced. Hence, flood insurance rates for shop owners would hypothetically lessen, and more owners would be able to afford flood insurance. This would bring back more shop owners to Main Street and increase its econ vitality. B) I recall he also stated that the up-stream mitigation plans, as formulated in response to the first flood, were proposed to be implemented over a ten-year period. Obviously, assuming that another "100-year flood event" would not come again so soon (a reasonable assumption), the County's agency was blindsided by the immediacy of the second big flood.

Several variables exist in this equation ie: 1) A probable future revision(s) of the FEMA's Flood Insurance Rate Map (FIRM) for this drainage area, 2) the impact of long-term climate change forecasting on the flood risks, as reflected in the FIRMs. And 3) if and how the no-build 100-year flood plain zone along Main street will consequentially change. My guess is that the 100=year plain will migrate further UP Main Street. Could this probability totally prohibit or severely limit existing or new development in that zone by the Ellicott City and HoCo authorities? A potentially tough long-term future for Main Street Ellicott City.

As you have suggested, many folks are now looking at the summer weather forecasts before venturing downtown. And, I'm sure the HoCo Dept of environ. regulation has found an increased sense of urgency in installing all proposed up-stream detention and diversion measures, , , , , , , before the end of the proposed 10-year program. Let's keep our Collective Fingers Crossed!! Don andberg