Are we letting our Children down with a Code of Silence? 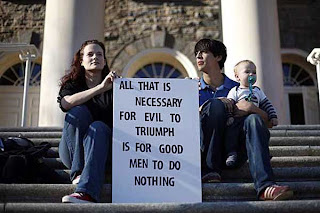 I grew up in a small town in Pennsylvania in the 1950's and 1960's that had a pedophile who was the Cub Scout leader and the Sunday School Superintendent at a local church.  Many people in town, including the Boy Scout leader, knew he was a pedophile but the town's "code of silence" prevented any charges from ever being brought against him.  In the past few years we have learned that child abuse still exists within almost every institution in our society and it still goes unreported.  Priests, teachers, coaches and Boy Scout leaders have been shown to use their positions of authority to abuse children. Somehow we have hoped that the recent realization that we all have a responsibility to not be silent about child abuse would prevent these acts from occurring today. Unfortunately two recent news stories have brought home the reality that child abuse is still a reality for many children today and authorities still look to protect their institutions instead of children.

At Penn State people within the University, including Joe Paterno, felt that sexually abusing children should have been handled as an internal manner.  The damage to the image of the institution seemed to be the overriding concern.  As a result ,as it was within the Catholic Church, no reports were made to law enforcement to have the situation handled as a criminal matter which it was.  Even when it comes to the horrendous crime of sexually abusing children many people given positions of authority in our institutions still react first to protect the image of the institution.

The second recent story has been in the news as a result of a You Tube video of a father beating his 16 year old daughter.  The father happens to be a judge and was a well respect member of his community. I am posting the link to the video to show how severe physical punishment can be with a parent who feels that corporal punishment is an acceptable form of discipline.  We still have many people today who would never condone kicking a dog or hitting a spouse but still feel that it is appropriate to use corporal punishment as a form of discipline with children.  Hitting a child is never about teaching them discipline but is about an adult taking their anger out on a vulnerable child.

Sadly we still have a long way to go to change the code of silence about child abuse in our society.

P.S.
I would be remiss if I didn't use this blog to direct people who want to become involved in this issue to VOICES for Children.  They are a great organization and are always looking for more volunteers to work with abused children.
Posted by duanestclair at 4:13 AM

I am very saddened by the harm done to children and their families by the sexual molestation and abuse enabled and covered over on PSU grounds by members of its staff -- who were by the way mandated reporters. I am heartened that the Board of Trustees has removed both the President of the University and Coach Paterno. I believe that is a step in the right direction and should be followed by removal of McQuery et al as cleaning house and starting again is the only reasonable road toward transparency and real integrity where actions match honest words.

I sincerely hope that going forward PSU will elect to position itself as the national go-to institution for research, public information, cirriculum surrounding child molestation and abuse. It seems to me that fear, denial and shame fueled by flat out ignorance in these matters brought many adults to mistakenly put their self-interests and PSU's reputation ahead of their primary obligations to children, and to lead and educate. The reality is that misuse of power, prestige and position are very common throughout our institutions. Child abuse and molestation are but one toxic extreme expression. There is so much that PSU as an institution can do to aim to change this and help children as well as adults to have the courage of their convictions to act ethically and beyond their self-interests when that is what is required to solve a problem and protect individuals especially children who are being hurt and misused.

The Board of Trustees needs to swiftly act to address the matter of PSU students who overwhelmingly objected to the Board's removal of Coach Paterno. Please know PSU was attacked by events in the football sex scandal that are emotional and psychological equivalents to 9/11 without the immediate deaths; both are life altering events for all involved. I believe the health and future of PSU is at stake at this time, and can be safeguarded by swift and decisive action.

First, a systematic plan needs to be engaged for healing beginning with dialog. On campus, mandatory discussion groups, seminars, etc should be convened immediately in addition to ongoing classes to give all open forums in appropriate groups to address the full breadth and scope of the impact and the issues involved, rather than to ignore the feelings of deeply betrayed students and adults. Corporate sponsorship can be sought to plan an incentive program to insure 100% compliance. There are many questions about what all this means, including but not limited to why it is mandatory that the Board remove anyone involved in the scandal who failed to act and to put protection of the children as their primary priority; why the students who were gathered to support former Coach Paterno were so aggressively opposed to the Board's removal decision. This goes much deeper than football standings, and the bragging rights and revenues that program had generated for PSU. A huge hero has been exposed as flawed and held to public rebuke that many do not fully understand. An adult-size life-lesson awaits the students -- one that if properly delivered and received can anchor their lives in ways they will one day deeply appreciate. That day may not occur while they are part of the student body. And, that's alright, but guiding and spearheading it is nonetheless the responsibility of the Board in order that this tragic, toxic chapter in PSU history can truly be placed where it belongs: In the past.

That needs to occur in conjunction with an advisory committee whose mission is to draw up an overall plan for healing the PSU community. That advisory committee would include experts in many fields especially the field of healing sexual issues (Dr. Patrick J. Carnes is one who comes to mind). The PSU sex scandal in the football department has opened the proverbial Pandora's box for all members of the PSU family. The Board must lead in addressing that as the beginning of the healing plan.

Please know this horrific tragedy is much more common than any of us wish to believe, so you all are not alone at all. It does not feel like it now perhaps, but you will be the better in the long run for exposing this toxic emotional cancer so that the soul surgery can commence.