Do we have homeless persons in Howard County? 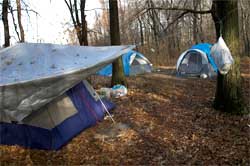 As a society or community we are challenged to determine how far from our immediate family do we sense a responsibility to others.  Do we have a responsibility for foster youth in our community?  The mentally ill? The elderly and others with significant disabilities? Are people poor or homeless individually responsible to “pull themselves up by their bootstraps?”  Or do we as a civilized society set a safety net beneath which we will not let anyone fall?  These ethical and political questions are being played out today in all levels of government and in every community in our country. Today I wanted to discuss how our community is addresses the question with one of the most vulnerable segments of our community---those that are homeless.
When we think of homelessness we probably think of our inner cities with people sleeping on the streets and panhandling.  While we have some panhandling around our community the homeless are not that visible.  Recently I had a chance to talk with Joe Willmott the Coordinator of the Plan to End Homelessness in Howard County to gain a better understanding of what homelessness in our community looks like.  He directed me to the Plan to End Homelessness that was developed last year by the Committee to End Homelessness.
On any given day more than 200 people are living in shelters or in the woods or their car.  Hundreds more are living with relatives, doubling up or “couch surfing.”  Shelters are always full and about a dozen people are turned away from our shelters every day.  Last year Grassroots and Bridges to Housing Stability turned away more than 4200 people and that is up from 3300 in 2009.  Many more are facing an uncertain future and are facing eviction or foreclosure.
The homeless population can be broken down into two main groups—the chronically homeless and the situationally homeless.  The chronically homeless are the ones that most people think of when they think of a homeless person.  They almost always have a mental illness or addiction problem or both that is a barrier to having a stable housing situation.  Often they have strained relationships with family that maybe could provide housing.  Starting in the 1970’s the deinstitutionalization of mentally ill from institutions wasn’t followed with the creation of adequate community mental health centers to address the needs of this population.  Substance abuse treatment programs never seem to be sufficient to address the amount of the need for these community programs. The streets become their home.
The situationally homeless are those persons who become homeless because of a loss of a job, an illness or an eviction.  For most of the lives these persons were not at risk for being homeless.  When these people find a new job or recover from an illness they are no longer homeless.  While the chronically homeless are usually single men and women, the situational homeless are many times families.  Last year the Howard County Public School System identified 462 children who were homeless or at risk of being homeless and that was up 27 percent from the previous year.  The lack of affordable housing in Howard County makes it difficult for families to find alternative housing if they have had a significant reduction in income. The average rental price for a 2 bedroom rental in Howard County is $1450, a 3 bedroom is $1850 and a 4 bedroom is $2500.  Affordable housing would be no more than 40% of your monthly income.
So what are the solutions to the current situation? Prevention for those that are going to be situationally homeless by trying to prevent eviction from current housing until an alternative housing situation is available.  Negotiating with landlords on reduced rents and emergency funds to pay rent would be helpful.  The earlier the situation is addressed the more likely that a resolution can be found. There maybe families that will have to move to areas where more affordable housing may exist.
For the chronically homeless who are dealing with mental illness or an addiction getting into a stable housing situation makes the possibility of addressing the underlying problem more likely.  It is hard to deal with the underlying problem when the person is homeless.  The development of sober houses and single room occupancies maybe the housing resources to address the housing need of the chronically homeless.
Columbus Ohio has tried to address the homeless issue by developing a plan that creates the mechanism to coordinate and measure the effectiveness of the multitude of needed services to prevent homelessness.  In working this way Columbus has been able to more effectively use resources and identify gaps in services that need to be addressed. By these techniques Columbus has developed a model for other communities to follow.

Sometimes people look at homelessness as something that will always be with us just like always having the poor among us.  The Great Society's "War on Poverty" is looked at as a failure.  But those efforts created many of the programs that provided a path to economic independence for millions of individuals.Some examples are Job Corps, whose purpose was to help disadvantaged youth develop marketable skills; the Neighborhood Youth Corps, established to give poor urban youths work experience and to encourage them to stay in school; Volunteers in Service to America (VISTA), a domestic version of the Peace Corps, which placed concerned citizens with community-based agencies to work towards empowerment of the poor; the Model Cities Program for urban redevelopment; Upward Bound, which assisted poor high school students entering college; legal services for the poor; the Food Stamps program; the Community Action Program, which initiated local Community Action Agencies charged with helping the poor become self-sufficient; and Project Head Start, which offered preschool education for poor children.

Is homelessness inevitable? That question is up to every community to answer for itself.  For a committed community the answer can be "no." Easy way to answer this question today is to donate to fellow blogger Tom Coale's effort to raise $3,000 for Grassroots.
Posted by duanestclair at 4:47 AM

Email ThisBlogThis!Share to TwitterShare to FacebookShare to Pinterest
Labels: homelessness