It has now been a few weeks to digest what has happened with the Ellicott City flood.  The Baltimore Sun on Sunday had a front page article highlighting the impact that development has had on the flooding problem with Main Street.  Main Street was built for a different time when the main source of flooding came from the Patapsco River.  Now the problem is the feeder rivers that flow into the Patapsco at Main Street.  The development around the area has created impervious surfaces that channel more to the rain water into these feeder rivers which were never designed to handle the amount of water runoff.  The developments are not going away and remediation efforts post development may only marginally improve the problem. It is interesting to look back at an article from a few years ago to see how marginal most flood control efforts would be.  At some point the question has to be raised that maybe Main Street as it has existed in the past isn't viable going forward with just a restoration of the buildings damaged in the flood.  Having said that Main Street Ellicott City is a County asset that can't be abandoned as having outlived its original purpose.  My hope is that the time spent moving forward would look more broadly in the restoration effort.  To simply look at rebuilding the area to restore it to its previous state maybe shortsighted.  We know that it is only a matter of time till we see the videos of the next flood of Main Street.
I have blogged before on paradigms and how they cause us to be too narrow in our focus in solving problems.  For how this is a problem click on the link in the previous sentence.  Simply put paradigms are the blinders we put on that cause us to miss new opportunities to improve how we do something.   Many times we only take our blinders off when something stops working as it has in the past or we experience failure when in the past we were successful.  If we take too long in taking off or blinders failure is repeated.  Think Kodak's slow response to digital photograph or Borders Books not developing an online store fast enough.
So getting back to Ellicott City what is the paradigm?  In my opinion it is that retail stores are what gives Main Street its vitality and viability.  Are there other possible options for Main Street that may create a new vitality for the area that better reflect the fact that the area is vulnerable to flooding. I think there are these options. 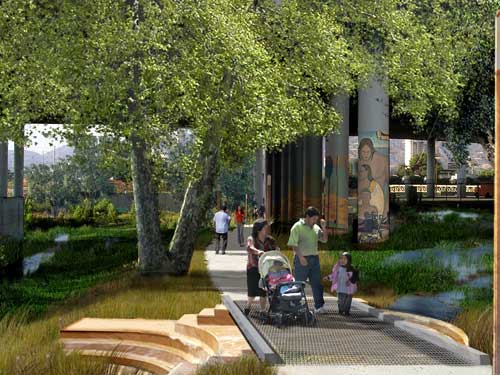 One option I would like to propose is an Ellicott City Festival and Recreational Park.

Ellicott City hosts many holiday events that could use this type of park at a focal site.
Using an historical theme think of a December colonial holiday celebration using some of what Williamsburg does in December.

Even more some of the type of summer events that CA hosts at the Kittamaqundi Lakefront could be hosted in a park in downtown Ellicott City but with an historical twist.
I am reminded of the old expression of "turning lemons into lemon aide."  The lemons in this case is the flooding potential of the streams flowing into the Patapsco River and the lemon aide is an Ellicott City Festival and Recreational Park that would never have been considered until the recent flood.

P.S.
I know that some may say that it is too early to be looking at the redevelopment of Main Street while the recovery effort is still in the early stages.  I understand that point of view but it won't be very long before decisions will be made on the restoration effort and it is useful to begin some of those discussions before options are narrowed down.

P.S.1
A shout out to all the bloggers who have been posting information on Ellicott City and its recovery efforts.  That shout out is loudest for Tom Coale who has been in the forefront of the recovery effort with the Ellicott City Partnership.  The two main sources of support to merchants and residents are the following:

Comments will be moderated but encouraged