Someone you should know--Edwin Gould

I hope to do a series of blogs on people in our community that I think you should know.  The first in this series is today's blog. 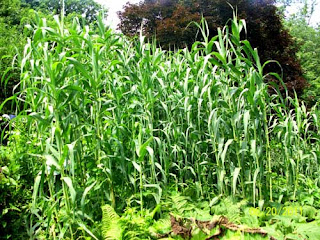 On my Saturday runs through Allview I couldn't help but notice one yard that I passed.  It had no regular grass that I could see but did have an amazing assortment of plants and wild grasses.  I also noticed many pottery pieces and Tibetan prayer flags.  This was someone that I would have to meet.  There had to be an interesting story there.

After going up to the door and knocking I spoke with a gentleman who seemed surprised that a stranger would be knocking on his door unannounced.  After quickly saying that I was not selling anything but was a blogger and was interested in writing a blog on him we made arrangements to come back to talk further. 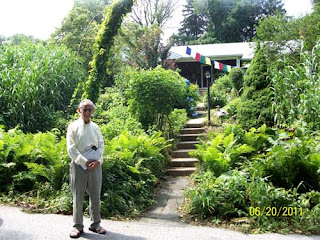 Coming back a few days ago I was introduced to Edwin Gould who described his interest in pottery and nature.  He retired in 1996 as the Curator of Mammals at the National Zoo in DC.  He related his background as having researched and taught on mammals of all types by especially on moles.  His interest in moles was obviously broader than most of us who view them as pests.

When I asked him about how he came to grow so many plants in his yard he explained that a friend who was a naturalist helped him lay out the design and select the plants. The design is basically two islands of different grasses.  Many of the grasses we would probably call tall plants more than grass.  The grasses and plants were selected for different qualities.  Some attracted animals like hummingbirds, some because they keep some animals like deer away, some for their fragrance and some for the interesting vein structure on their leaves. 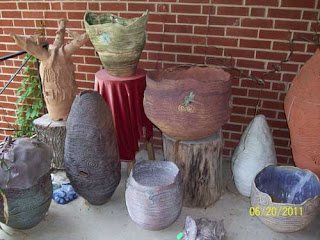 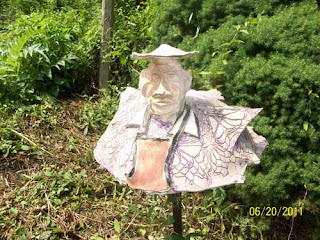 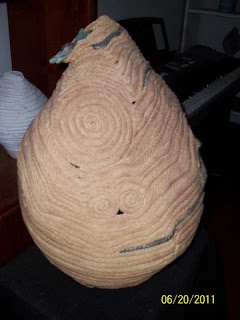 Mr. Gould's pottery all had a interesting pattern that looked like they were made out of rope encased in clay. After inquiring on how they were made I was shown his technique that truned a strand of clay into something that looked like rope.  Each strand of clay was then layered on top of each other to be shaped as a large vase.  He finally fired the piece in his kiln for display.  He sells a few of the pieces and keeps many for his own enjoyment.

Finally one of the amazing connections I found with Mr. Gould is that he is very involved with Our House, a non-profit on which I have blogged.  He has helped with their organic garden, planted trees and recently started helping them with a bee colony to make honey. Small world.

I knew that architectural guidelines in Allview were probably non-existent and Mr. Gould said that he hadn't had complaints about his yard from neighbors but just curiosity.  I thought I would check out how my Owen Brown Village would look at a village resident doing something similar to what Mr. Gould did.  I was told that as long as the planting was an effort to create a garden of plants and not created by neglect then it would most likely be accepted as within the village guidelines.  It would probably be a good idea to let the village staff know about your plans in case anyone complained about your unusual yard.  I am not sure I want to go to all the work of a planned natural plant or animal preserve but it does appeal to me on one level.  I have always disliked the whole lawn grass with fertilizer and mowing thing.  I have thought of mulching and planting wild flowers like the State Highway Administration has done on the median areas of Route 70.  Adds beauty and eliminates mowing.  Maybe next Spring I will get motivated to try something similar.

If you have anybody you think should be profiled as an interesting person in our community send me an email.

I will be out of town the next few days so I may take a short break with blogging unless I have something interesting to write about.  Have a good weekend and be sure to check out what is growing at Larriland.
Posted by duanestclair at 4:30 AM

This is a great story. Thanks for sharing!